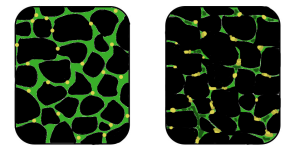 The muscular dystrophies are important inherited disorders of muscle. They are characterised by their sheer diversity, their multifaceted presentations, and their complicated diagnostic pathways.

In contrast, limb girdle muscular dystrophies (LGMD) are quite complex. They result from abnormalities in a staggering array of muscle proteins such as calpein, sarcoglycan, lamin, myotilin, and desmin. They are challenging for neurologists to diagnose, not only because they require sophisticated muscle tests to pin down, but because new types are being churned out at a breath-taking pace. There are now 8 that are inherited dominantly (LGMD 1A-1H) and… wait for it…26 which are inherited recessively (LGMD 2A-2Z).

Feeling overwhelmed? Why not first try the summarising checklists:

The Ups and Downs of Online Therapy