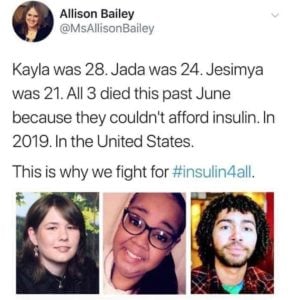 From Medium/Eudaimonia and Co: “A profound loss of the integrity of the self is what abuse genuinely is: the internalization of the harm that has one been done to one, over and over again, until one believes that one has deserved it, needed it, earned it. Abuse is a cycle, a burden passed down through the generations: no one is born an abuser. And so it’s at this moment, I’d guess, that the American psyche turns genuinely abusive. First, our average American needed safety in the arms of a father or mother figure, to make up for an unsafe world — and now they begin to believe that there exist good reasons that they needed to be abused, and thus, that they should and must behave abusively, too.

What are those reasons? Probably something like these. That to succeed, one must be more ruthless and merciless than the next person. That one’s suffering is a measure of one’s weakness, and therefore suffering must be erased and denied, not felt and understood. That one’s purpose in life is to amass power and privilege, no matter how barren or empty one feels inside. They are the prices one has learned that one must pay in an unsafe world, not for safety, warmth, security, which are by definition impossible to find, but just to exist at all, protected, at least, by their abusers.

And so now the second dilemma of the abusive society arises: one must abuse people to earn a sense of self, just to feel protected, but the price is happiness, because happiness comes from the strength and quality of one’s relationships, and in this mode of relating, one has no genuine relationships — only absences and emptinesses, voids and lacks of seeing and knowing people as people.

. . . A flight to mega-institutions is one solution to an abusive society. But it is a poor one, because it seeking the protection of one’s abusers, not from them, and thus licensing them. And so it can only ever be a palliative, like taking heroin for the pain of being abused all one’s life long. What Americans really need is to fix the cycles of abuse that have driven them to seek, and yet never find, safety in the unsafe world they themselves have created. To undo the predatory ways of being that they came to call wise and just and true, but in fact, were only ever the lament of the hurt child, begging, just for an instant, to be held, to be known, to be loved.”

Language and Aphasias » Department of Neurology » College of Medicine » University of...

COVID-19 on the Brain: Neurological Symptoms Persist in Majority of Long-Haulers