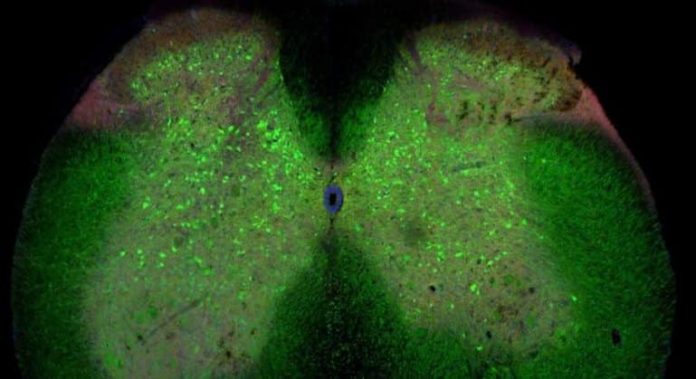 Summary: Inhibitory neurons in the spinal cord lose their connections to motor neurons in mouse models of ALS. While no connection between this deterioration to the development of ALS has been made, researchers say the loss of inhibitory signals could explain why motor neurons die in those with ALS.

ALS is a very severe neurodegenerative disease in which nerve cells in the spinal cord controlling muscles and movement slowly die. There is no effective treatment and the average life expectancy after being diagnosed with ALS is usually short. Because of this, new knowledge about the disease is urgently needed.

Now, researchers from the University of Copenhagen have gained new insights about ALS, by investigating the early development of the disease in a mouse model.

“We have found that networks of nerve cells in the spinal cord called inhibitory interneurons lose connection to motor neurons, the nerve cells that directly control muscle contraction. We do not yet know if these changes cause the disease. But the loss of the inhibitory signal could explain why the motor neurons end up dying in ALS”, says first and co-corresponding author to the new study Ilary Allodi, Assistant Professor at the Department of Neuroscience.

A lot of ALS research have focused on the motor neurons themselves, but the research group at the University of Copenhagen had a different approach.

“It is only natural that motor neurons have received major attention. They control our muscles, which is the challenge for ALS patients. Here, we wanted to investigate the circuit of interneurons in the spinal cord because they determine the activity of motor neurons. Since we found that there is a loss of connections between inhibitory interneurons and motor neurons that happens before the motor neuron death, we think that this loss could be a possible explanation for why the motor neurons ends up dying in ALS patients”, says Ole Kiehn, senior, co-corresponding author and Professor at the Department of Neuroscience.

In ALS patients, the degeneration typically starts with what is called the fast-twitch motor neurons and then goes on to other motor neurons. This means that certain muscles and bodily functions are affected before others. Normally, patients lose coordination and speed in movement before more basic functions such as breathing. This is mirrored in the new findings, according to the researchers.

“In our mouse model, we show that the loss of connection happens to fast motor neurons first and then slow motor neurons later on involve a particular type of inhibitory neurons, the so called V1 interneurons”, says Roser Montañana-Rosell, who is PhD student and shared first author on the study.

Expanding the window of opportunity

The researchers underline that the mechanisms should be investigated in human patients as well. However, they do not have any reason to believe that the same or similar biological mechanisms are not at play in humans.

Given the new understanding of the disease, Ilary Allodi hopes further research into the signaling process could reveal how to repair the nerve cell connection loss in ALS.

“We definitely hope that our findings can contribute with a new way of thinking about ALS development. With a distinct focus on interneurons, we might be able, in future experiments, to increase the signaling processes from the interneurons to the motor neurons and prevent or delay the motor neuron degeneration from an early stage,” ends Ilary Allodi.

ALS is characterized by progressive inability to execute movements. Motor neurons innervating fast-twitch muscle-fibers preferentially degenerate. The reason for this differential vulnerability and its consequences on motor output is not known.

The V1 interneuron degeneration appears before motor neuron death and is paralleled by the development of a specific locomotor deficit affecting speed and limb coordination. This distinct ALS-induced locomotor deficit is phenocopied in wild-type mice but not in SOD1G93A mice after appearing of the locomotor phenotype when V1 spinal interneurons are silenced.

Our study identifies a potential source of non-autonomous motor neuronal vulnerability in ALS and links ALS-induced changes in locomotor phenotype to inhibitory V1-interneurons.