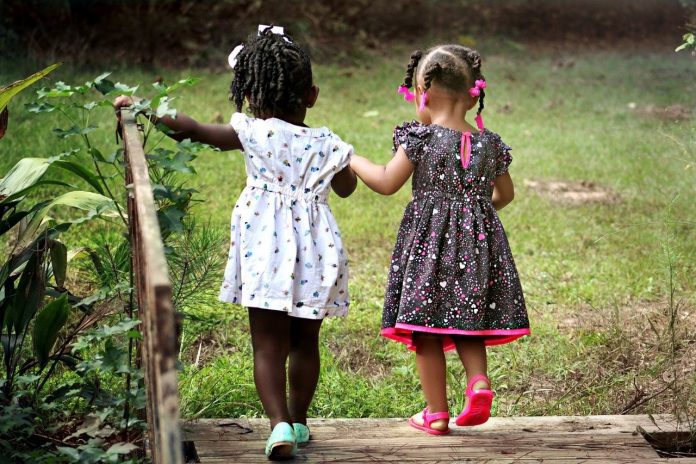 Summary: By the age of three, children are more likely to go along with what peers say in order to follow the crowd, rather than acting out of a desire to follow authority.

What makes preschoolers eat their veggies? Raise their hand? Wait their turn? “Because I say so” is a common refrain for many parents. But when it comes to getting kids to behave, recent research suggests that the voice of adult authority isn’t the only thing that matters. Around age three, fitting in with the group starts to count big too.

That’s the finding of a new study by Duke University researchers showing that, by their third birthday, children are more likely to go along with what others say or do for the sake of following the crowd, rather than acting out of a desire to kowtow to authority or heed that person’s preferences per se.

“Every culture has its do’s and don’ts,” said first author Leon Li, a doctoral student in psychology and neuroscience at Duke.

We’re not born knowing what to say when someone sneezes, the right and wrong time to wear a hat, or that we should eat with a fork and not with our hands. But most of us begin to pick up on these unwritten social rules when we are very young, and quickly figure out when and how to follow them.

The question, Li said, is what makes young children “behave”? What propels a 3-year-old to use their quiet voice when they’d rather sing and shout? What’s really going on when a person covers their cough and a preschooler follows suit, against their own inclination?

Perhaps children this age are not really trying to conform to the accepted way of doing things, some have suggested, as much as they are trying to show regard for adults by doing what they say. Or the child’s copycat behavior could be rooted in a desire to feel bonded with that person.

To better understand what motivates preschoolers to fall in line, the researchers conducted a study in the lab of professor Michael Tomasello at Duke, where Li and Duke undergraduate Bari Britvan invited 3.5-year-olds to help set up for a pretend tea party.

Each of the 104 children was given a blue sticker to wear at the start of the study, and told that the people with that color sticker were part of the same team.

Next the researchers watched as the children decided among different kinds of teas, snacks, cups and plates for the tea party, first on their own and then after listening to the choices of other team members.

Sometimes the other team member framed their choice as a matter of personal preference. (“For my tea party today, I feel like using this snack.”) Other times they presented it as a norm shared by the whole group: (“For tea parties at Duke, we always use this kind of snack.”)

After listening to the choices of others, most of the time the children stuck with their first choice. In other words, children who initially said they felt like using, say, the donut eventually wound up picking the donut no matter what the other person said they were using.

But 23% of the time the children switched their choice to settle for someone else’s. And when they did, they were more likely to go along with the other person when an option was presented as a group norm rather than a mere personal preference.

The pattern held up even when the other person was another child, not an adult, suggesting that the preschoolers weren’t simply acting out of a desire to imitate adults or obey authority.

Li says the findings lend support to an idea, proposed by Tomasello and colleagues, about how children develop the moral reasoning capacity that sets humans apart from other animals.

When an adult says to an infant or a toddler, “we don’t hit,” the child generally does as she’s told out of deference to that person. But eventually, by around their third birthday, children start to think in a different way. They begin to understand cues such as “we don’t hit” as something larger, coming from the group, and act out of a sense of connectedness and shared identity.

Young children conform more to norms than to preferences

As members of cultural groups, humans continually adhere to social norms and conventions. Researchers have hypothesized that even young children are motivated to act conventionally, but support for this hypothesis has been indirect and open to other interpretations.

To further test this hypothesis, we invited 3.5-year-old children (N = 104) to help set up items for a tea party. Children first indicated which items they preferred but then heard an informant (either an adult or another child) endorse other items in terms of either conventional norms or personal preferences.

Children conformed (i.e., overrode their own preference to follow the endorsement) more when the endorsements were framed as norms than when they were framed as preferences, and this was the case whether the informant was an adult or another child. The priority of norms even when stated by another child opposes the interpretation that children only conformed in deference to adult authority.

These findings suggest that children are motivated to act conventionally, possibly as an adaptation for living in cultural groups.