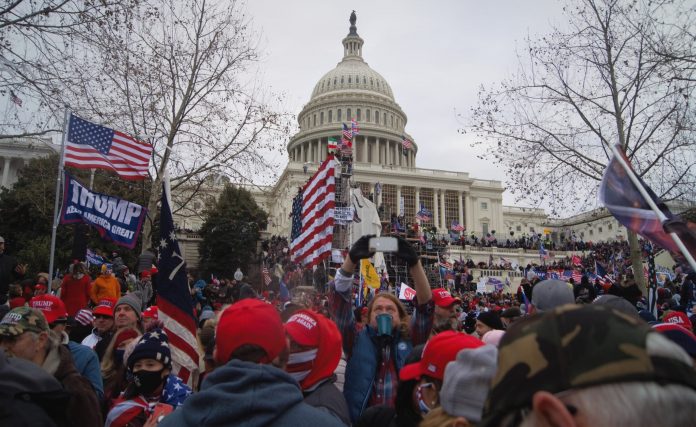 On January 6 this year, Trump supporters gather in front of the White House to attend Donald Trump’s rally to “Stop the Steal”. Confederate and USA flags, together with those bearing “Trump 2020” and “Jesus saves” mark the scene. Among the crowd of red MAGA caps: young and old, women and men, and even some people of colour.

Near the Washington Capitol, another group is already getting organised, skipping the rally completely: the far-right group, the Proud Boys, infamously known for their racist and misogynist agenda. Remember when Trump told them to “stand back and stand by”? – well, they answered by “Standing by sir.”

Not surprisingly then, when rally attendees arrive at the Capitol, members of the Proud Boys significantly drive the forceful access to the building. Chants like “USA, USA”, “stop the steal”, and “our house” are dominating the scene. Now united, the self-defined “patriots” (a term commonly used among the far-right) are on a mission to take over the Capitol. Only a minority amongst the crowd – now dominantly white male, is covering their faces, however, the majority is seemingly not camera-shy.

While some of the documentation has been provided by on-site journalists, a significant amount of live footage was streamed, uploaded, and shared online by white supremacists themselves. While this was mainly directed towards like-minded others, the question remains why anyone would publicly document their part taking in gaining unauthorised access to a government building.

From a social psychological perspective, one answer to this is because rioters perceived that what they did was right and justified. However, a commonly neglected variable in the explanation of collective action, we suggest, is collective empowerment. But what would the sources of empowerment be in this case?

In my research, I investigate the question of how racists become vicariously empowered by events of socio-political importance and what consequences this entails. In a recent study, we surveyed Democrats and Republicans a month before and two weeks after the 2020 US election. We found that Republicans who expected an electoral victory experienced a drop in collective psychological empowerment from before to after the election, suggesting that election results can have profound effects on supporters’ sense of power and possibility. Empowerment is a continuum and can go both ways: while perceived electoral defeat of one’s supported party is associated with disempowerment, perceived electoral victory can lead to empowerment.

The motivation to partake in violent action can thereby come from multiple ways. First, there is a “cognitive pathway” involving a shared social identity leading to expectations that ingroup others will support actions we might take in line with our norms. We believe that dynamics observed in progressive movements can also be applied to situations in which a shared social identity is characterised by self-defined injustice: Trump supporters were convinced that Donald Trump was the legitimate winner and the Republican Party in power, and therefore that a majority in the public would agree with them in their actions to realise this victory.

The other way to empowerment and hence collective action derives from a “strategic” pathway which does not require identifying with the wider group, but which follows from the vulnerability of a shared outgroup, in this case, the government. This can explain why the Proud Boys were mobilised not only through Donald Trump’s approval, but significantly through the immediate situation that was handed to them, realising their agenda, and entering a “combat zone”.

The enactment of rioters’ shared anti-government identity was, however, not only an attack on the American legislature but also sends a threatening message out to marginalised communities. It thereby does not solely derive from those storming the building but also from those “opening” doors. The existing double standard among the police is obvious: while BLM protesters, who were fighting police brutality against African Americans and systemic racism, were faced with lethal treatment by the police or confronted with heavily armed special forces summer last year, white officers apparently facilitated gaining access to the building last month, literally enabling the Capitol rioters. As an African American police officer reports, he was not only called by the n-word 15 times that day, but he was also let down by his white superior and colleagues.

The risk for target groups is further increased through the effects the mobilisation has on racists and white supremacists themselves: a successfully enacted collective identity as a consequence of an empowerment experience can lead to further empowerment and corresponding action in the future. Although objectively speaking, the riot could be viewed as a failed attempt to take over, the definition of “success” depends upon how it is framed: the sheer ability to gain access to the building on January 6 was perceived amongst the international far-right scene as showing “positive potential”, and individual rioters were even hailed as heroes.

Thus, analysing the dynamics behind collective psychological empowerment is crucial to understand why, when, and how hate crimes and far-right violence occur. More importantly, though is thereby to understand how we can disempower perpetrators to make scenes as seen last month not happening again.

Carina Hoerst is a PhD student in Social Psychology under the supervision of Prof John Drury. This post was originally published on the Crowds and Identities Research Group blog.

Do you have Brain Inflammation? How to know and what to do

The Role of Sleep in Healing Traumatic Brain Injuries