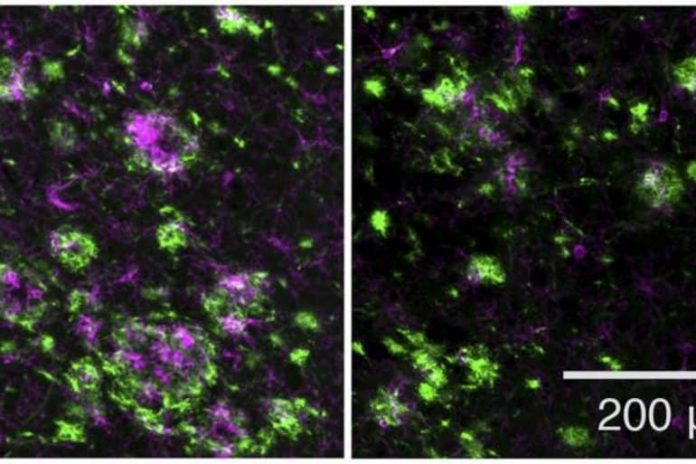 Summary: A new drug modulates, rather than inhibits, a key enzyme implicated in the formation of Alzheimer’s related plaques.

Researchers at the University of California San Diego School of Medicine and Massachusetts General Hospital have identified a new drug that could prevent Alzheimer’s disease by modulating, rather than inhibiting, a key enzyme involved in forming amyloid plaques in the brain.

The study, which will be published March 2 in the Journal of Experimental Medicine (JEM), demonstrates that the drug is safe and effective in rodents and monkeys, paving the way for future clinical trials in humans.

A key pathological hallmark of Alzheimer’s disease involves the formation of amyloid plaques composed of small protein fragments known as amyloid-β (Aβ) peptides. These peptides are generated by enzymes called β-secretase and γ-secretase, which sequentially cleave a protein called amyloid precursor protein on the surface of neurons to release Aβ fragments of varying lengths. Some of these fragments, such as Aβ42, are particularly prone to forming amyloid plaques, and their production is elevated in patients with mutations predisposing them to early-onset Alzheimer’s disease.

Several attempts have been made to treat or prevent Alzheimer’s disease using drugs that inhibit either β-secretase or γ-secretase. But many of these drugs have proved to be unsafe in humans, likely because β-secretase and γ-secretase are required to cleave additional proteins in the brain and other organs.

A better approach could involve drugs known as γ-secretase modulators (GSMs), which, instead of inhibiting the γ-secretase enzyme, slightly alter its activity so that it produces fewer Aβ peptides that are prone to form plaques while continuing to cleave its other protein targets.

In the new study, Wagner and colleagues developed a novel GSM and tested it on mice, rats, and macaques. Repeated low doses of the drug completely eliminated Aβ42 production in mice and rats without causing any toxic side effects. The drug was also safe and effective in macaques, reducing Aβ42 levels by up to 70%.

The researchers then tested the drug in a mouse model of early-onset Alzheimer’s disease, treating the animals either before or shortly after they began to form amyloid plaques. In both cases, the novel GSM decreased plaque formation and reduced plaque-associated inflammation, which is thought to contribute to the development of disease.

This suggests that the drug could be used prophylactically to prevent Alzheimer’s disease, either in patients with genetic mutations that increase susceptibility to the disease or in cases where amyloid plaques have been detected by brain scans.

“In this study, we have pharmacologically characterized a potent GSM that, based on its preclinical attributes, appears to equal or exceed the potency of any previously tested GSMs,” adds Dr. Rudolph E. Tanzi, Professor of Neurology at Harvard and Massachusetts General Hospital. “Future clinical trials will determine whether this promising GSM is safe in humans and could be used to effectively treat or prevent Alzheimer’s disease.”

A potent γ-secretase modulator (GSM) has been developed to circumvent problems associated with γ-secretase inhibitors (GSIs) and to potentially enable use in primary prevention of early-onset familial Alzheimer’s disease (EOFAD).

Unlike GSIs, GSMs do not inhibit γ-secretase activity but rather allosterically modulate γ-secretase, reducing the net production of Aβ42 and to a lesser extent Aβ40, while concomitantly augmenting production of Aβ38 and Aβ37. This GSM demonstrated robust time- and dose-dependent efficacy in acute, subchronic, and chronic studies across multiple species, including primary and secondary prevention studies in a transgenic mouse model.

An Interview with Lynne Layton

How Our Brains Track Where We and Others Go