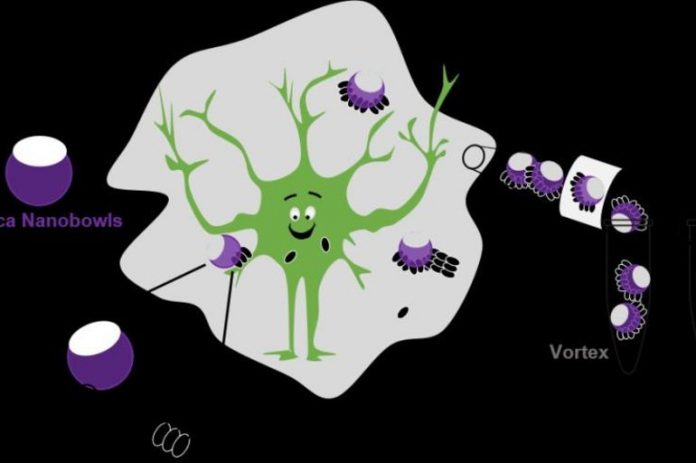 Scientists are still a long way from being able to treat Alzheimer’s Disease, in part because the protein aggregates that can become brain plaques, a hallmark of the disease, are hard to study. The plaques are caused by the amyloid beta protein, which gets misshapen and tangled in the brain. To study these protein aggregates in tissue samples, researchers often have to use techniques that can further disrupt them, making it difficult to figure out what’s going on.

But new research by Vrinda Sant, a graduate student, and Madhura Som, a recent PhD graduate, in the lab of Ratnesh Lal at the University of California, San Diego, provides a new technique for studying amyloid beta and could be useful in future Alzheimer’s treatments. Sant and her colleagues will present their research on Friday, February 26 at the 65th Annual Meeting of the Biophysical Society.

Scientists have been studying the possibility of using nanoparticles, ultra-small structures that can be coated in therapeutics, to provide targeted treatments for a number of diseases.

There are several potential applications for nanoparticles, such as coating them with chemotherapy agents and targeting them to a tumor for cancer treatment without toxic side effects for the rest of the body. Sant began researching bowl-shaped nanoparticles, which she calls “nanobowls,” as a potential way to deliver treatments for Alzheimer’s Disease.

Sant expected to have to coat the nanobowls in some kind of pharmaceutical in order to have them alleviate the amyloid beta protein plaques that contribute to Alzheimer’s. But the amyloid beta proteins clung to the nanobowls even when they were just coated in a lipid-polymer without pharmaceuticals added, allowing the scientists to remove the toxic protein aggregates from the cells.

“We were surprised to find that the nanobowls were therapeutic themselves,” Sant says.

Sant says while using nanobowls as therapeutics for Alzheimer’s Disease can be a potential application, it currently serves scientists who want to better understand the amyloid beta aggregates. In their recent research, Sant and team found that multiple forms of amyloid beta aggregates co-exist and not all forms directly convert into amyloid plaques, confirming what had been a hypothesis in the field.

The research team is now working on using nanobowls to extract and further study amyloid beta protein aggregates. With amyloid beta being implicated in neurodegenerative diseases, cancer and cardiovascular conditions, nanobowls have potential for a range of diagnostics and treatments.

About this nanotech research news

Original Research: The findings will be presented at the 65th Annual Biophysical Society Meeting

Variability of T2-Relaxation Times of Healthy Lumbar Intervertebral Discs is More Homogeneous within an...