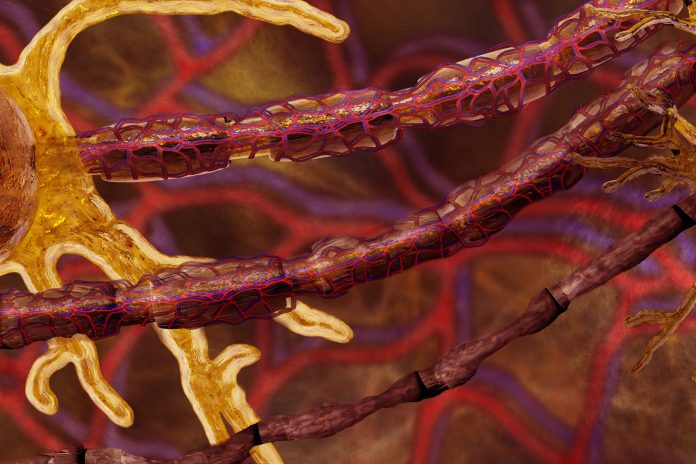 Sensorimotor neuropathy is common in diabetes, with about half of individuals with diabetic peripheral neuropathy (DPN) presenting with chronic symptoms of neuropathic pain. Current treatment approaches include drugs serotonin-norepinephrine reuptake inhibitors, sodium channel blockers, opioids, and tight blood glucose control. An improved analgesic treatment is desirable to improve on the current generalized therapies available, according to researchers.

Through both mouse models and human research, researchers have proven that the endogenous opioid pathway mediated by POMC is impaired in diabetes. In the current study, researchers have identified a pivotal antinociceptive mechanism in the peripheral nervous system that may represent a new therapeutic target for future DPN treatments.

“Our study demonstrates the presence of the endogenous opioid precursor, POMC, in the sensory ganglia of mice and humans and its importance in antinociception, especially during painful DPN,” the researchers wrote, adding that during diabetes, the POMC µ-opioid receptor (MOR) opioid pathway becomes “dysfunctional” at both the ligand and receptor level. These findings explain why MOR-targeting opioids, such as tramadol and oxycodone, do not uniformly provide relief in people with DPN.

Data also show that POMC expression in the peripheral nervous system is primarily somatic; dorsal root ganglia soma have been identified as the main reservoir for precursor POMC. Physiologically, these data mean that mechanisms in the peripheral nervous system are likely to “suppress the subthreshold pain signals and/or termination of a nociceptive signaling response,” according to study authors. Although POMC may, under “normal” conditions, aid in resolution of acute pain, this pathway is impaired with chronic conditions such as diabetes.

Ultimately, investigators found that diminished POMC and MOR levels in sensory ganglia are associated with increased hypersensitivity toward pain and that MOR aids the antinociceptive effect against thermal hyperalgesia. The study results further confirmed that downregulation of POMC and MOR in diabetes is not gender-specific.

“There is a complex interplay of several aberrant mechanisms culminating in neuropathic pain during diabetes,” the researchers concluded. “We demonstrate that the underlying metabolic disturbances also cause the malfunction of the antinociceptive POMC-pathway, which constitutes the ‘loss of function’ and thereby promote a neuropathic pain state in diabetes. Reinstating this pathway helped overcome neuropathic pain, establishing the therapeutic significance of this inhibitory subspinal mechanism.”

‘Dark Empaths’: How Dangerous Are Psychopaths and Narcissists With Empathy?