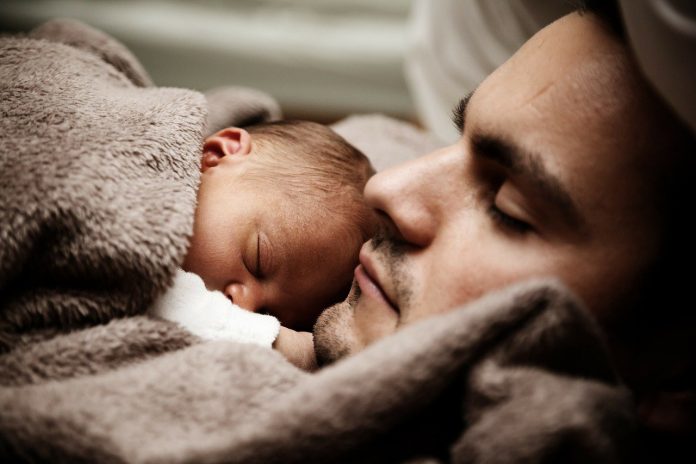 Summary: Stress experienced by fathers during early life was associated with more rapid development of white matter tracts in his child’s brain.

The FinnBrain research of the University of Turku has demonstrated for the first time that the stress the father has experienced in his childhood is connected to the development of the white matter tracts in the child’s brain. Whether this connection is transmitted through epigenetic inheritance needs further research.

Evidence from multiple new animal studies demonstrates that the changes in gene function caused by environment can be inherited between generations through gametes. In particular, nutrition and stress have been proven to cause these types of changes. However, these do not alter the nucleic acid sequence of the DNA; environment appears to alter function of the genes through so-called epigenetic mechanisms.

New discoveries on the role of epigenetics in the regulation of gene function have led to whole new considerations about the mechanisms of inheritance as researchers used to think that acquired characteristics cannot be inherited. These types of phenomena transmitted from one generation to other have not, however, been studied much in humans.

In the FinnBrain research, the researchers identified 72 families with information about the early stress experiences of both parents and MR image of the child’s brain taken at the age of few weeks available.

The researchers discovered that the father’s exposure to stress was connected to quicker development of white matter tracts in the child’s brain. The white matter tracts are made up of “cables” connecting different parts of the brain, and they have a central role in brain function.

The relationship between father’s exposure to stress and the development of the child’s white matter tracts remained even when the researchers took into consideration the impact of the mother’s early stress exposure and other possible contributing factors during the pregnancy.

According to Professor Hasse Karlsson, who is the Principal Researcher of FinnBrain, the significance of the discovery on the later development of the child is still unclear:

“The relevance of our study is that this type of connection in humans was discovered in the first place. To be able to investigate whether these types of connections are actually transmitted through the epigenetic changes in sperm cells, we have started to collect the fathers’ semen samples and study these epigenetic markers together with a research group lead by Professor Noora Kotaja from the University of Turku.”

Launched in 2010, FinnBrain is a birth cohort study of the University of Turku involving over 4,000 families and aiming at exploring environmental and genetic factors influencing the development of a child. In addition to questionnaires and registers, the FinnBrain project also utilises the mapping of genes, behavioural traits, and hormonal metabolism as well as brain imaging that produce new information on the factors promoting well-being during childhood.

About this genetics and brain development research news

Early life stress (ELS) has been shown to affect brain development and health outcomes. Recent animal studies have linked paternal early stress exposures with next-generation outcomes. Epigenetic inheritance through the male germline has been suggested to be one of the mechanisms.

To test whether paternal ELS, as measured using the Trauma and Distress Scale, is associated with neonate brain development.

This cohort study included data from participants from the prospective 2-generation FinnBrain Birth Cohort, which was collected from 2011 to 2015. Pregnant women and the fathers were consecutively recruited at gestational week 12 from maternity clinics in Finland. Magnetic resonance imaging data were analyzed in 2019. Participants in this study were 72 families (infant, father, mother).

Fractional anisotropy (FA) values in the major white-matter tracts of the newborn brain.

A total of 72 trios (infant, mother, and father) were analyzed. At the time of delivery, the mean (SD) age was 31.0 (4.4) years for fathers and 30.3 (4.5) years for mothers. Forty-one infants (57%) were boys; mean (SD) child age at inclusion was 26.9 (7.2) days from birth and 205 (8) days from estimated conception. Increasing levels of paternal ELS were associated with higher FA values in the newborn brain in the body of the corpus callosum, right superior corona radiata, and retrolenticular parts of the internal capsule. This association persisted after controlling for maternal ELS, maternal socioeconomic status (SES), maternal body mass index, maternal depressive symptoms during pregnancy, child sex, and child age from birth and gestation corrected age when imaged. In additional region-of-interest analyses, the association between FA values and paternal Trauma and Distress Scale sum scores remained statistically significant in the earliest maturing regions of the brain, eg, the genu of the corpus callosum (in the regression models, β = 0.00096; 95% CI, 0.00034-0.00158; P = .003) and the splenium (β = 0.00090; 95% CI, 0.00000-0.00180; P = .049).

This cohort study found a statistically significant association between paternal ELS and offspring brain development. This finding may have far-reaching implications in pediatrics, as it suggests the possibility of a novel route of intergenerational inheritance of ELS on next-generation brain development.