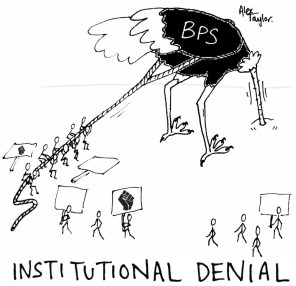 On January 18th, 2021, the American Psychiatric Association (APA) released the ‘APA’s Apology to Black, Indigenous and People of Color for Its Support of Structural Racism in Psychiatry‘. The letter from its Board of trustees aimed to acknowledge the institution’s shameful racist history. There is still, without question, a long way to go before we see equality in the field, but this apology is a start.

Their statement marks a milestone in Psychiatry. The institution has a history of racist practices dating back to its inception in 1844, including its founding segregated treatment system. At the time, the diagnosis ‘drapetomania’ was accepted – a diagnosis of mental illness for Black people who disliked the idea of being enslaved. Racist theories of white superiority were continually evidenced by the APA’s ‘scientific’ research. Despite outcry from its ethnic minority members, the APA continued to stay silent on racist practices throughout the US Civil Rights Movement. Their 2021 apology statement and historical addendum finally acknowledge their historic support of a racist agenda and apologise to those affected. But is this really the turning point they describe?

The statement makes no attempt to explain why it has not come sooner. The APA’s newest President Jeffrey Geller, MD, MPH, spearheaded its publication. As quoted by the APA’s newspaper Psychiatric News, he stated, “the events of 2020 – the killings of Black people by police, the health inequities laid bare by the pandemic – were an eye-opener for many among our membership.” A disappointing, but typical, admission of the distress levels BAME people must endure to be recognised.

The apology must be followed by tangible action to avoid going down in history as performative. ‘Anti-racist’ is a critical phrase the APA used to describe their future. Real anti-racism will require them to change their racist policies, meaning all those leading to racist outcomes. Currently, they acknowledge that leadership, education and training, research, and outcomes for patients must all be improved. Still today, we inappropriately pathologise people dealing with the effects of racism. Although their apology is admirable, it must preface structural change.

All related disciplines will need to take positive action to overcome the inequality of our social services. The APA’s institution-wide apology is a necessary step for scientific integrity. But more importantly, it is a step towards practitioners who recognise the intergenerational trauma that has been created and continues to be perpetuated by our disciplines.

As a future psychologist in the UK, I implore the British Psychological Society (BPS) to follow suit. In June of 2020, the BPS released a statement in solidarity with those feeling pain due to the year’s racial injustices. Yet, after being called out in July, they silently removed an article available on their website ‘evidencing’ the low IQ of ‘Negroids’ and small genitalia of ‘Mongoloids’. Countless incidents such as these show that although an apology is only a first step, many institutions are still not ready to take it. They would first need to grasp what it is they are apologising for.

The psychology of apologies tells us that little concern for the victim and worries about self-image are barriers to apologising. An institutional apology, therefore, shows basic respect for those impacted by racist research and practice. Institutional egos are notoriously fragile, so I commend the APA for doing the right thing. However, an apology could never heal the pain their racism has caused for entire generations. It must now be the catalyst of a radical transformation into an organisation that carries no lingering trace of racism and condemns prejudice utterly, in thought, word and deed, to history.

Alex is currently studying our MSc in Experimental Psychology. She previously completed a BSc in Mathematics at King’s College London.

Getting Ahead: Why Women Need Workplace Friends

Anyone Can Get Super-Hearing – Neuroscience News

Researchers Find the Adhesions That Build the Brain’s Networks