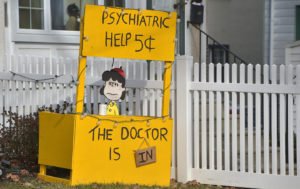 From The Nation: “Most people looking for care couldn’t simply ‘reach out,’ as the billboards would have it, even if they wanted to. There are months-long wait lists for providers, and care isn’t cheap. Many providers don’t take insurance, meaning that people end up having to cough up at least $150 per session for a psychotherapist and $250 for a psychiatrist. Even if you find a clinician who accepts insurance, most insurance providers still require a co-pay, and $30 to $50 per week adds up, especially in a country where almost half of people don’t have $400 on hand for an emergency.

Even if we lived in a country where everyone could immediately be seen by excellent providers they could afford, there would still be problems with framing our mental health crises as a matter of awareness. Many people have legitimate reasons for feeling anxious and hopeless. A small selection: Americans work long hours while wages remain low and unemployment remains high. We are living through a pandemic that has killed more than 400,000 Americans and shows no signs of being effectively contained. Being murdered by police is a leading cause of death for young Black and Latino men, and many high-profile police killings of people of color have gone practically unpunished. We may have crossed planetary tipping points that would make climate change compounding and irreversible. By many measures, the United States is a failed state. Is it any surprise that more and more Americans are escaping these realities through drugs and even suicide?”

Be kind to your mind

Immaturity of Microbiota and Epithelial Barriers Implicated in Neonatal Meningitis

Arthur Schüller: Founder of Neuroradiology. A Life on Two Continents