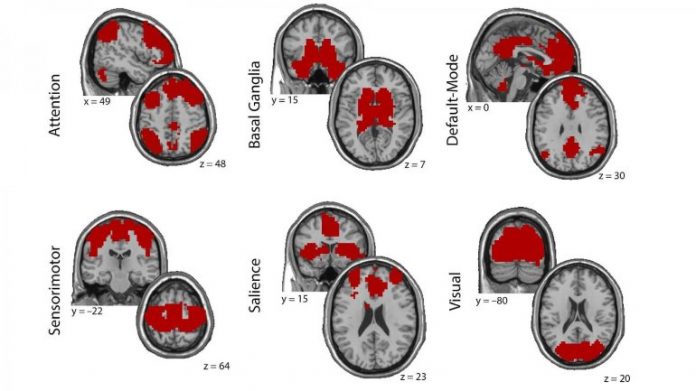 Summary: Study sheds light on the effects of allostatic closed-loop neurotechnology on functional brain connectivity in those with traumatic stress.

HIRREM (the legacy research technology of Cereset – a Brain State Company) was utilized by the Wake Forest School of Medicine to study symptoms of traumatic stress in military personnel before and after use of Cereset (legacy) intervention.

For the current study, lateralization of brain connectivity was analyzed. Lateralization here refers to the distribution of brain connections within the right, and left side, or to the opposite side. This is important because common lobes in the right and left hemispheres of the brain execute different functions. Of note for these results, the parasympathetic division of the autonomic nervous system (which we think of as the “brake to rest and digest”) is managed primarily on the left, and the sympathetic division (which we think of as the “gas to go”) is driven primarily on the right.” Thus, the dominant left is a “freeze or numbing” response indicator, and in contrast, a dominant right is the “fight or flight” response indicator.

The brain is the organ of central command which activates and manages autonomic responses to trauma and stress. Results of this study support the model of bihemispheric autonomic management of traumatic stress (BHAM), proposed by Brain State and Wake Forest 6 years ago. Regulated connections of the brain appear to be the upstream driver of health and wellbeing. When connections between hemispheres are more balanced, individuals are healthier.

Of note is the basis for this brain movement towards a healthier pattern. Cereset merely reflects the brain’s own electrical patterns using engineered tones to represent dominant brain frequencies. The client receiving Cereset is comfortably seated in a reclining chair to listen to the brain generated tones or BrainEcho®. This supports the brain to relax, to change, and to reset itself to improve balance and symmetry, which is associated with reduced symptoms of traumatic stress.

Many prior clinical studies have demonstrated benefits associated with the use of Cereset for symptoms of insomnia, depression, stress, anxiety, concussion, hot flashes, postural orthostatic tachycardia, and migraine. The current and previous clinical trials also included objective outcome measures such as heart rate variability to demonstrate significant improvement in autonomic function. Symptom benefits were durable for up to 6 months in the current study, and autonomic improvement was durable through the final follow-up visit at 4 months in a placebo-controlled trial for insomnia.

The addition of the MRI lateralization findings reported in this study and the correlation with symptoms not only support the BHAM model but also point to a mechanism of effect for the clinical benefits previously reported with Cereset. Symptoms associated with trauma, stress, and allostatic load now affect a majority of the population. Cereset noninvasively supports the brain to balance and regulate itself with resulting benefits for psychological symptoms of traumatic stress and improved autonomic function.

Funding: Funding for this study was provided by: The Susanne Marcus Collins Foundation Inc., Joint Capability Technology Demonstration Program within the Office of the Under Secretary of Defense, US Special Operations Command, and the Wake Forest Clinical and Translational Science Institute.

Brain asymmetries are reported in posttraumatic stress disorder, but many aspects of laterality and traumatic stress remain underexplored. This study explores lateralization changes in resting state brain network functional connectivity in a cohort with symptoms of military‐related traumatic stress, associated with use of a closed‐loop neurotechnology, HIRREM.

Before HIRREM, significant laterality effects of connection type (ipsilateral for either side, or contralateral in either direction) were observed for the whole brain, within networks or regions, and between networks or regions. Post‐HIRREM, there were significant changes for within‐network or within‐region analysis in the motor network, and changes for between‐network or between‐region analyses for the salience network and the motor cortex.

A Middle Finger to Oppression and DBT by Rebecca Donaldson