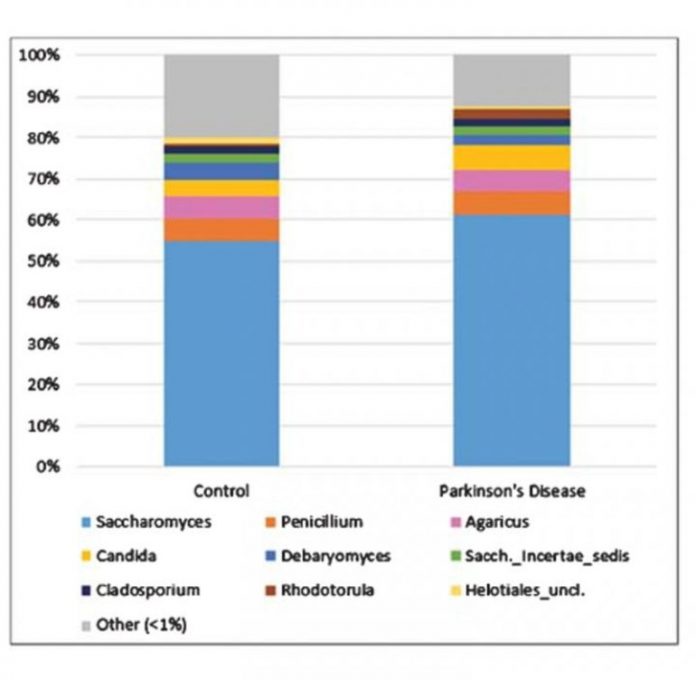 Summary: While gut microbes may be associated with Parkinson’s disease, gut fungi are not, a new study reports. The study refutes the speculation gut anti-fungal treatments are helpful for Parkinson’s patients.

The bacterial gut microbiome is strongly associated with Parkinson’s disease (PD), but no studies had previously investigated the role of fungi in the gut. In this novel study published in the Journal of Parkinson’s Disease, a team of investigators at the University of British Columbia examined whether the fungal constituents of the gut microbiome are associated with PD. Their research indicated that gut fungi are not a contributing factor, thereby refuting the need for any potential anti-fungal treatments of the gut in PD patients.

“Several studies conducted since 2014 have characterized changes in the gut microbiome,” explained lead investigator Silke Appel-Cresswell, MD, Pacific Parkinson’s Research Centre and Djavad Mowafaghian Centre for Brain Health and Division of Neurology, Faculty of Medicine, University of British Columbia. “Most existing studies, however, employ bacterial-specific sequencing. To date, a potential role for the fungal constituents of the gut microbiome, also known as the “mycobiome,” has remained unexplored.”

In order to investigate whether the fungal constituents of the gut microbiome are associated with PD researchers enrolled 95 PD patients and 57 controls from the Pacific Parkinson’s Research Centre (PPRC) at the University of British Columbia. Participants provided a single fecal sample and completed a two-hour study visit during which their PD symptoms were assessed.

Analysis determined that the fungal microbiome in PD did not essentially differ from that of matched controls, and there were no strong associations between gut fungi and PD symptoms.

Fungi were very sparse among participants’ fecal microbiomes. After filtering, 106 of the 152 participants (64/95 PD and 42/57 control) remained for downstream compositional analysis; the remainder had virtually no detectable fungal genomic content. Most of the genera identified were environmental or dietary in origin.

Saccharomyces was by far the most dominant fungal genus detected. Although these investigations did not reveal any significant role for gut fungi in PD, interestingly, lower overall fungal abundance (relative to bacteria) in the PD gut were observed, which might reflect a less hospitable environment of the gut in PD.

This paper plays an important role by answering the call by the PD research community and funding organizations to publish negative results, crucial to avoid investing precious research funding into likely futile endeavors and providing a more balanced reflection of data in the field.

“The data are an important piece in the puzzle of understanding the overall role of the gut microbiome in PD,” continued Dr. Appel-Cresswell. “PD patients can rest assured that gut fungal overgrowth, or dysbiosis, is likely not a contributing factor to any of their PD symptoms, both motor and non-motor.”

“The gut microbiome in PD continues to be an exciting field of research where we are just at the beginning of unraveling potential mechanisms. It will be important to publish negative results as well as positive findings along with detailed methods to have a realistic reflection of the data in the literature to accelerate discovery,” she concluded.

PD is a slowly progressive disorder that affects movement, muscle control, and balance. It is the second most common age-related neurodegenerative disorder affecting about 3% of the population by the age of 65 and up to 5% of individuals over 85 years of age. In recent years, more attention has been given to the gut as a key player in the initiation and progression of PD.

About this Parkinson’s Disease research news

The Gut Mycobiome in Parkinson’s Disease

The gut microbiome has been increasingly implicated in Parkinson’s disease (PD); however, most existing studies employ bacterial-specific sequencing, and have not investigated non-bacterial microbiome constituents. Here, we use fungal-specific internal transcribed spacer (ITS)-2 amplicon sequencing in a cross-sectional PD cohort to investigate associations between the fungal gut microbiome and PD. Fungal load among participants was extremely low, and genera identified were almost exclusively of proposed dietary or environmental origin. We observed significantly lower fungal DNA relative to bacterial DNA among PD patients. No fungi differed in abundance between patients and controls, nor were any associated with motor, cognitive, or gastrointestinal features among patients.