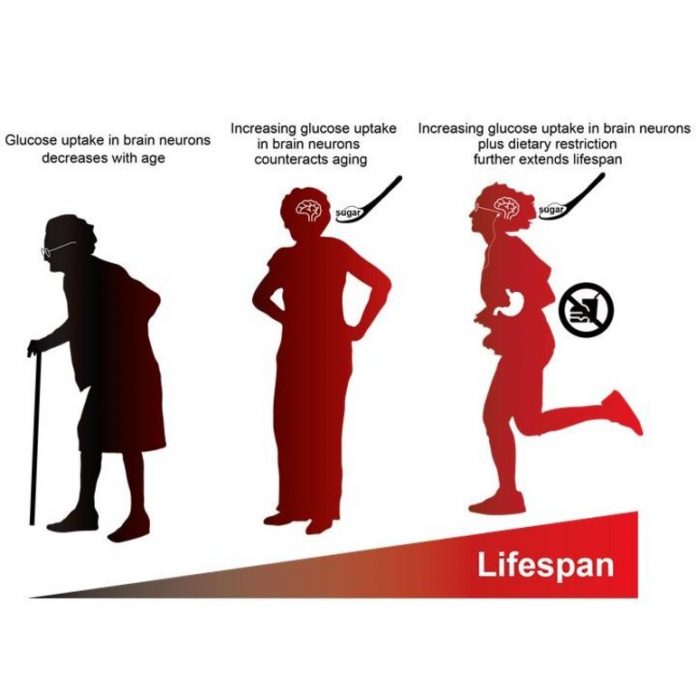 Looking at the brain cells of aging flies, they found that better glucose uptake compensates for age-related deterioration in motor functions, and led to longer life. The effect was more pronounced when coupled with dietary restrictions. This suggests healthier eating plus improved glucose uptake in the brain might lead to enhanced lifespans.

The brain is a particularly power-hungry part of our bodies, consuming 20% of the oxygen we take in and 25% of the glucose. That’s why it’s so important that it can stay powered, using the glucose to produce adenosine triphosphate (ATP), the “energy courier” of the body.

This chemical process, known as glycolysis, happens in both the intracellular fluid and a part of cells known as the mitochondria. But as we get older, our brain cells become less adept at making ATP, something that broadly correlates with less glucose availability. That might suggest that more food for more glucose might actually be a good thing.

On the other hand, it is known that a healthier diet actually leads to longer life. Unravelling the mystery surrounding these two contradictory pieces of knowledge might lead to a better understanding of healthier, longer lifespans.

A team led by Associate Professor Kanae Ando studied this problem using Drosophila fruit flies. Firstly, they confirmed that brain cells in older flies tended to have lower levels of ATP, and lower uptake of glucose. They specifically tied this down to lower amounts of the enzymes needed for glycolysis.

To counteract this effect, they genetically modified flies to produce more of a glucose-transporting protein called hGut3. Amazingly, this increase in glucose uptake was all that was required to significantly improve the amount of ATP in cells. More specifically, they found that more hGut3 led to less decrease in the production of the enzymes, counteracting the decline with age.

Though this did not lead to an improvement in age-related damage to mitochondria, they also suffered less deterioration in locomotor functions.

But that’s not all. In a further twist, the team put the flies with enhanced glucose uptake under dietary restrictions, to see how the effects interact. Now, the flies had even longer lifespans. Curiously, the increased glucose uptake did not actually improve the levels of glucose in brain cells. The results point to the importance of not just how much glucose there is, but how efficiently it is used once taken into cells to make the energy the brain needs.

Though the anti-aging benefits of a restricted diet have been shown in many species, the team were able to combine this with improved glucose uptake to leverage the benefits of both for even longer lifespans in a model organism. Further study may provide vital clues to how we might keep our brains healthier for longer.

Funding: This work was supported by a research award from the Japan Foundation for Aging and Health, a JSPS KAKENHI Grant-in-Aid for Scientific Research on Challenging Research (Exploratory) (19K21593), NIG-JOINT (71A2018, 25A2019), a Grant-in-Aid for JSPS Research Fellows (18J21936) and Research Funding for Longevity Science (19-7) from the National Center for Geriatrics and Gerontology, Japan.

About this aging research news

Brain neurons play a central role in organismal aging, but there is conflicting evidence about the role of neuronal glucose availability because glucose uptake and metabolism are associated with both aging and extended life span. Here, we analyzed metabolic changes in the brain neurons of Drosophiladuring aging. Using a genetically encoded fluorescent adenosine triphosphate (ATP) biosensor, we found decreased ATP concentration in the neuronal somata of aged flies, correlated with decreased glucose content, expression of glucose transporter and glycolytic enzymes and mitochondrial quality. The age-associated reduction in ATP concentration did not occur in brain neurons with suppressed glycolysis or enhanced glucose uptake, suggesting these pathways contribute to ATP reductions. Despite age-associated mitochondrial damage, increasing glucose uptake maintained ATP levels, suppressed locomotor deficits, and extended the life span. Increasing neuronal glucose uptake during dietary restriction resulted in the longest life spans, suggesting an additive effect of enhancing glucose availability during a bioenergetic challenge on aging.

Nutrition Is the Foundation of Resilience

What Can We Learn from Alcohol? A Paradigm Shift in How We View Distress