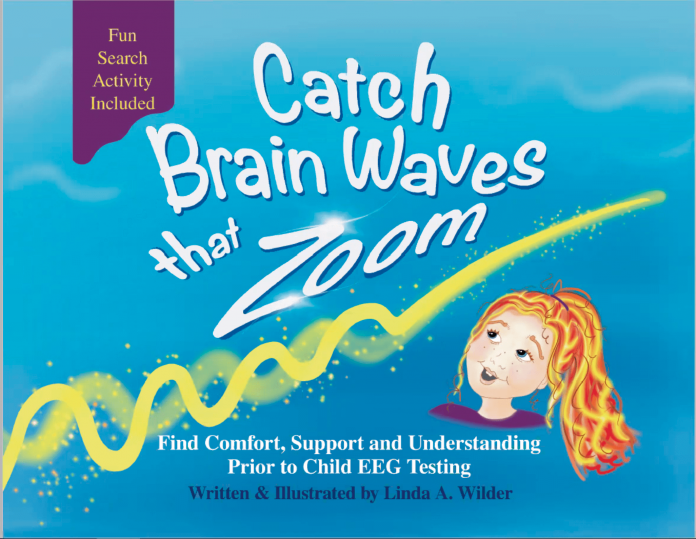 Linda Wilder hadn’t been an EEG technologist long when she saw a need to help children prepare for neurodiagnostic exams.

Her new book, Catch Brainwaves That ZOOM: Find Comfort, Support and Understanding Prior to Child EEG Testing, is due to be published early this year (2021). Wilder wrote and illustrated the book herself. She sees it as a tool that can be beneficial for both children and technologists.

Wilder came to neurodiagnostics later in life. She developed a quick fascination with the field, she said.

“I’d just turned 50 and I was working in a medical office right next to a neuro department. My brother died by suicide and I needed to get happy and do something productive and something that I felt mattered,” she told us in a recent interview. “I thought, ‘Brainwaves on the screen — wow.’ I didn’t know that was possible. It was a new revelation for me that this might be something that I could do.”

In 2016, Wilder won a scholarship from ASET: The Neurodiagnostic Society, completed training at the Institute of Health Sciences and became a registered EEG technologist.

Previously, Wilder focused her career on working with children and building self-esteem among the younger generations.

“I really enjoyed the classroom setting, working with kids,” Wilder said. “I especially liked kindergarten because I got to sing songs and use my imagination more, telling stories and reading stories to children.”

Later, after her daughter was born, she enjoyed being creative with an at-home floral arrangement business. When her daughter went to college, Wilder made the move to EEG and this children’s book idea allowed her career path to come full circle.

“I would open the door to the waiting room and there would be a child clinging to their mother in fear,” she said. “That’s where the book started, the idea that children could be prepared for something like this and didn’t have to necessarily be in the dark when they arrived. I told my co-worker, ‘Wouldn’t it be nice to have a book in a waiting room?’”

Wilder wanted the book to have a calming effect with language and images that spoke to children. The book uses soothing colors and offers some exciting complexities, she said.

“It’s a book that a child can read over and over again because there’s a hidden game inside,” she said. “I made the child in the story a victor. It’s the child who accomplishes something valuable. So hopefully it’ll give a child a sense of ‘I can do this.’”

Wilder also had techs in mind when she wrote the book.

“I hope the book will encourage technologists. If they don’t have pediatric patients, then maybe it’s something that they can become more interested in,” she said. “They’ll see that there are ways to relate to children with playfulness and to create more of a sense of wonder.”

Wilder’s book will be published by ASET—Learn more and order a copy.

According to Brett Alpaugh, senior marketing manager for neurology products at Ambu Inc., Ambu is going to be purchasing a number of these books and donating them to a variety of children’s hospitals throughout the country.

Brain Development Is Surprisingly Similar Between Humans and Other Primates