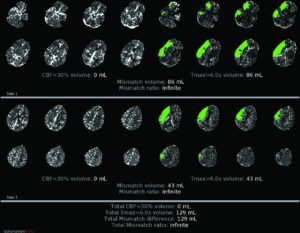 We reviewed a prospective, single-center data base of 271 consecutive patients who underwent CTA ± CTP for acute ischemic stroke from May 2018 through January 2019. Patients with emergent large-vessel occlusion confirmed by CTA in the extended window (>6 hours since last known well) and CTP with RAPID postprocessing were included. Two blinded raters independently assessed CT ASPECTS on NCCT performed at the time of CTP. RAPID software used relative cerebral blood flow of <30% as a surrogate for irreversible core infarct. Patients were dichotomized on the basis of receiving recent IV iodinated contrast (<8 hours before CTP) for a separate imaging study.

Patients who received IV iodinated contrast in proximity (<8 hours) to CTA/CTP as part of a separate imaging study had a much higher likelihood of core infarct underestimation with RAPID compared with contrast-naïve patients. Over-reliance on RAPID postprocessing for treatment disposition of patients with extended window emergent large-vessel occlusion should be avoided, particularly with recent IV contrast administration.

A Placebo‐Controlled Trial of Rasagiline » Department of Neurology » College of Medicine »...