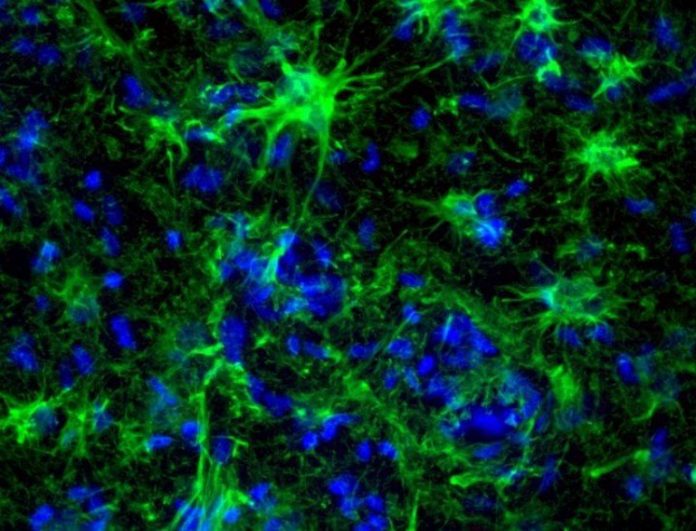 A research team at the University of California, Riverside School of Medicine has identified a pathway involving astrocytes, a class of central nervous system support cells, that could shed light on why seizures happen in a subset of multiple sclerosis, or MS, patients.

Study results, available in ASN Neuro, improve scientific understanding of how seizures arise in MS and could provide the foundation for better therapies to manage treatment-resistant seizures in MS and other brain diseases.

Characterized by progressive episodic decline in neurological function, MS affects more than 900,000 people in the United States. This autoimmune disease damages the fatty sheath — myelin — that protects nerve fibers, which hinders the speed of signals in the central nervous system.

While not classically considered a defining symptom of the disease, seizures occur three-times more often in MS patients than healthy individuals and may portend a flare-up of symptoms. MS patients that experience seizures also have a decreased quality of life and higher mortality rate. The mechanisms that cause seizures in MS patients remains poorly understood.

“During a seizure, there is a dysfunction between inhibition and excitation and a bunch of neurons fire together without control,” said Seema Tiwari-Woodruff, a professor of biomedical sciences and senior author on the paper.

Neurons are cells in the central nervous system that transmit information between the body or other neurons to allow us to move, feel, and think. Astrocytes provide the fastidiously maintained environment that the neurons need to perform by controlling the molecular signals present in the brain. Seizures can occur when astrocytes are unable to keep up with this task.

Tiwari-Woodruff and her colleagues examined postmortem brain tissue obtained from MS patients who experienced seizures (7 samples) and MS patients that did not (21 samples). The team found that astrocytes in the hippocampal samples taken from MS patients with seizure showed signs of being less able to regulate the kinds of signals likely to cause a seizure.

“The most exciting aspect of the study was discovering that astrocytes in the brains of MS patients with seizures looked a lot like astrocytes in epileptic brains,” said Andrew S. Lapato, a postdoctoral fellow at the University of Colorado, Anschutz Medical Campus who as first author conducted the work as part of his graduate studies in Tiwari-Woodruff’s lab. “Researchers might be able to enhance the support roles of astrocytes or compensate for their dysfunction to prevent or treat seizures in MS patients.”

EAAT2 is the most widely distributed glutamate transporter in mammalian brains. A reduction in EAAT2 allows the neurons to fire more frequently, resulting in increased seizure activity. The reduction in this transporter has been observed in both patients with MS and temporal lobe epilepsy.

AQP4 maintains the extracellular space volume that allows for ion movement across the connective tissue of the nervous system. A reduction in AQP4 allows the concentration of extracellular potassium ions to increase, which may depolarize neurons and lead to hyperexcitability and protracted stimulation-evoked seizures. The researchers found these results are analogous to epilepsy, suggesting a similar process in MS patients with seizures.

Previous studies found CX43, the major connexin isoform expressed by astrocytes, is altered in response to inflammation or demyelination. Increased CX43 expression is also common in patients with epilepsy. While this study was unable to draw a more definitive link between CX43 and seizure activity, it opens another pathway to explore in future studies.

For this study, the team obtained 28 brain tissue samples from the National Institute of Health NeuroBioBank/Human Brain & Spinal Fluid Resource Center brain bank at the University of California, Los Angeles. The samples in the study were 57% female and 43% male patients. The samples for MS with seizures represent male and female patients almost equally.

“One of the treasures of having post-mortem brain tissues for our study is that we can use them to see how expressed proteins differ among MS patients,” Tiwari-Woodruff said. “If we don’t know what the disease looks like, then we don’t know what we can do to treat it.”

Tiwari-Woodruff and Lapato were joined by Sarah Thompson and Karen Parra at the UCR School of Medicine on the study, titled “Astrocyte Glutamate Uptake and Water Homeostasis Are Dysregulated in the Hippocampus of Multiple Sclerosis Patients with Seizures.”

Funding: The project received funding from the National Institutes of Health.

While seizure disorders are more prevalent among multiple sclerosis (MS) patients than the population overall and prognosticate earlier death & disability, their etiology remains unclear. Translational data indicate perturbed expression of astrocytic molecules contributing to homeostatic neuronal excitability, including water channels (AQP4) and synaptic glutamate transporters (EAAT2), in a mouse model of MS with seizures (MS+S). However, astrocytes in MS+S have not been examined. To assess the translational relevance of astrocyte dysfunction observed in a mouse model of MS+S, demyelinated lesion burden, astrogliosis, and astrocytic biomarkers (AQP4/EAAT2/ connexin-CX43) were evaluated by immunohistochemistry in postmortem hippocampi from MS & MS+S donors. Lesion burden was comparable in MS & MS+S cohorts, but astrogliosis was elevated in MS+S CA1 with a concomitant decrease in EAAT2 signal intensity. AQP4 signal declined in MS+S CA1 & CA3 with a loss of perivascular AQP4 in CA1. CX43 expression was increased in CA3. Together, these data suggest that hippocampal astrocytes from MS+S patients display regional differences in expression of molecules associated with glutamate buffering and water homeostasis that could exacerbate neuronal hyperexcitability. Importantly, mislocalization of CA1 perivascular AQP4 seen in MS+S is analogous to epileptic hippocampi without a history of MS, suggesting convergent pathophysiology. Furthermore, as neuropathology was concentrated in MS+S CA1, future study is warranted to determine the pathophysiology driving regional differences in glial function in the context of seizures during demyelinating disease.

What Happens in Your Brain When You Make a Decision?

What Techs Need to Know About Quantitative EEG

Here Are the Top 10 Neurology Insights Stories from 2020