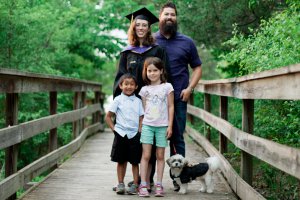 Tabitha Althoff is a neurodiagnostic technologist with her hands in a lot of pots: She runs a lab, directs an NDT training program, and has a new invention on its way to market.

She also has ankylosing spondylitis and Ehlers-Danlos syndrome. But, she doesn’t let that define her.

It was eight years ago when Althoff was first diagnosed and told to file for disability and leave her career behind. At the time she was just a few years into her career as a neurodiagnostic technologist, working in intraoperative monitoring at Barrows Neurological Institute in Phoenix, Arizona.

“I was 26, and I literally woke up one day, and I could barely see my hands,” she said.

The day before, her vision had been perfect, Althoff told us in a recent interview. The pressure in her eyes, it turned out, would cause blindness in about half a year if they couldn’t get it under control, according to her doctors. The cause was an autoimmune disorder that attacks the spine and the eyes, called ankylosing spondylitis (AS).

“I have permanent spots, floaters and flashes of light from the damage that occurred when my vision went haywire,” she said. “I also lost some of my depth perception and peripheral vision.”

That was when her rheumatologist told her to get her paperwork in order and sign up for disability.

She wouldn’t quit her job. Instead she wore sunglasses and a series of rapidly evolving prescription lenses in order to see the EEG waveforms. She continued looking for answers to help her condition.

Unfortunately, along the way she was told she also had a second underlying autoimmune disorder, Ehlers-Danlos syndrome (EDS).

Both AS and EDS “spawned at the same time—overnight,” she said. “They said, ‘you were tired, your immune system was low and it just attacked.’”

EDS affects the connective tissue in the joints, causing instability and dislocations.

“The collagen in my joints gets weak for no reason,” she explained. “I start the morning, super stiff and unable to move. But then by the end of the day, I’m at the other end of the spectrum, where I’m so loose that I need braces, otherwise I dislocate out of place.”

Althoff has had reconstructive surgery on her shoulder, hip, and both knees.

Despite a second diagnosis, Althoff said she wouldn’t accept disability. She started to search for specialists and found  Dr. Lianne Gensler at the University of California San Francisco.

Her AS, it turned out, could be managed, for the most part, with special daily eye drops. For the EDS side of things, she got a service dog, Batman – a Shih Tzu and Bichon Frise mix.

“If I didn’t have him, I would be in a wheelchair,” she said. “He can smell the collagen weakness. He alerts me to sit down to prevent the dislocation from occurring. He’ll paw at me and whimper until I sit. He also picks up anything I drop and brings it to me. He’ll bring me my braces when I dislocate, or he’ll go get help.”

Althoff said that Batman is the first service dog at Advocate Aurora Health in Milwaukee, Wisconsin where, today, she is Manager of Neurodiagnostics.

“In meetings, he’s usually sitting on my lap, and no one even knows he’s there,” she said.

Since the discovery of her “disabilities,” Althoff has gone on to earn a bachelor’s degree in neurodiagnostics and sleep science as well as a master’s in business administration. She also helped found and is currently the program director of neurodiagnostic technology at Carroll University.

Her latest enterprise is a single-use aerator and tray, which is on track to be available for sale in early 2021.

“I hope sharing my story inspires others to think outside the box and learn that medical issues build character, they don’t control you,” she said. “As much trouble as my medical condition brings, it allows me to look at things differently, which has helped me in many ways in my career, and I wouldn’t change it for the world.”

Special thanks to Tabitha Althoff MBA, BS-NDSS, R. EEG T, R. PSG T, RST for sharing her story. You can connect with her on LinkedIn.

The Neurobiology of Memes and Conspiracy Theories