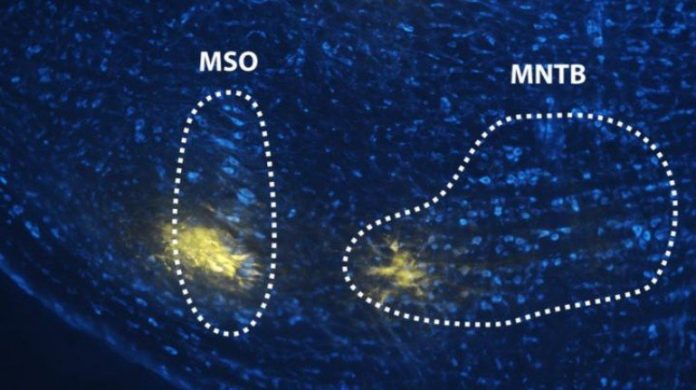 Summary: Study reports a pervasive neuromodulation system strongly influences sound processing in a key auditory region of the brain. Findings suggest acetylcholine may assist in the brain’s ability to distinguish speech from other noise.

For the first time, researchers have provided physiological evidence that a pervasive neuromodulation system – a group of neurons that regulate the functioning of more specialized neurons – strongly influences sound processing in an important auditory region of the brain. The neuromodulator, acetylcholine, may even help the main auditory brain circuitry distinguish speech from noise.

“While the phenomenon of these modulators’ influence has been studied at the level of the neocortex, where the brain’s most complex computations occur, it has rarely been studied at the more fundamental levels of the brain,” says R. Michael Burger, professor of neuroscience at Lehigh University.

The findings have been described in an article, “Endogenous Cholinergic Signaling Modulates Sound-evoked Responses of the Medial Nucleus of the Trapezoid Body,” published earlier this month in The Journal of Neuroscience. The journal’s editors designated the article as “noteworthy” and it was included in “featured research” for its particular significance to the scientific community.

“This study will likely bring new attention in the field to the ways in which circuits like this, widely considered a ‘simple’ one, are in fact highly complex and subject to modulatory influence like higher regions of the brain,” says Burger.

The team conducted electrophysiological experiments and data analysis to demonstrate that the input of the neurotransmitter acetylcholine, a pervasive neuromodulator in the brain, influences the encoding of acoustic information by the medial nucleus of the trapezoid body (MNTB), the most prominent source of inhibition to several key nuclei in the lower auditory system. MNTB neurons have previously been considered computationally simple, driven by a single large excitatory synapse and influenced by local inhibitory inputs.

The team demonstrates that in addition to these inputs, acetylcholine modulation enhances neural discrimination of tones from noise stimuli, which may contribute to processing important acoustic signals such as speech. Additionally, they describe novel anatomical projections that provide acetylcholine input to the MNTB.

Burger studies the circuit of neurons that are “wired together” in order to carry out the specialized function of computing the locations from which sounds emanate in space. He describes neuromodulators as broader, less specific circuits that overlay the more highly-specialized ones.

“This modulation appears to help these neurons detect faint signals in noise,” says Burger. “You can think of this modulation as akin to shifting an antenna’s position to eliminate static for your favorite radio station.”

“In this paper, we show that modulatory circuits have a profound effect on neurons in the sound localization circuitry, at very low foundational level of the auditory system,” adds Zhang.

In addition, during the course of this study, the researchers identified for the first time a set of completely unknown connections in the brain between the modulatory centers and this important area of the auditory system.

Burger and Zhang think these findings could shed new light on the contribution of neuromodulation to fundamental computational processes in auditory brainstem circuitry, and that it also has implications for understanding how other sensory information is processed in the brain.

The medial nucleus of trapezoid body (MNTB) is a major source of inhibition in auditory brainstem circuitry. The MNTB projects well-timed inhibitory output to principal sound-localization nuclei in the superior olive (SOC) as well as other computationally important centers. Acoustic information is conveyed to MNTB neurons through a single calyx of Held excitatory synapse arising from the cochlear nucleus. The encoding efficacy of this large synapse depends on its activity rate, which is primarily determined by sound intensity and stimulus frequency. However, MNTB activity rate is additionally influenced by inhibition and possibly neuromodulatory inputs, albeit their functional role is unclear. Happe and Morley (2004) discovered prominent expression of α7-nicotinic acetylcholine receptors (nAChRs) in rat SOC, suggesting possible engagement of acetylcholine (ACh)-mediated modulation of neural activity in the MNTB. However, the existence and nature of this putative modulation has never been physiologically demonstrated. We probed nicotinic cholinergic influences on acoustic responses of MNTB neurons from adult gerbils (Meriones unguiculatus) of either sex. We recorded tone evoked MNTB single neuron activity in vivo using extracellular single-unit recording. Piggyback multi-barrel electrodes enabled pharmacological manipulation of nAChRs by reversibly applying antagonists to two receptor types, α7 and α4β2. We observed that tone-evoked responses are dependent on ACh modulation by both nAChR subtypes. Spontaneous activity was not affected by antagonist application. Functionally, we demonstrate that ACh contributes to sustaining high discharge rates and enhances signal encoding efficacy. Additionally, we report anatomical evidence revealing novel cholinergic projections to MNTB arising from pontine and superior olivary nuclei.

This study is the first to physiologically probe how acetylcholine, a pervasive neuromodulator in the brain, influences the encoding of acoustic information by the MNTB, the most prominent source of inhibition in brainstem sound-localization circuitry. We demonstrate that this cholinergic input enhances neural discrimination of tones from noise stimuli, which may contribute to processing important acoustic signals such as speech. Additionally, we describe novel anatomical projections providing cholinergic input to the MNTB. Together, these findings shed new light on the contribution of neuromodulation to fundamental computational processes in auditory brainstem circuitry and to a more holistic understanding of modulatory influences in sensory processing.

How to Disguise Lousy Luck as an Absolute Win