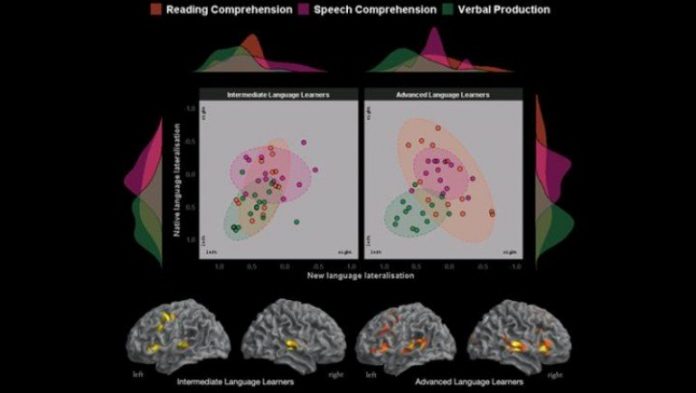 Summary: Learning a new language as an adult alters hemisphere specialization for comprehension, but not for production.

Learning a language later in life changes how the two halves of the brain contribute. As skills improve, language comprehension changes hemisphere specialization, but production does not, according to new research published in Journal of Neuroscience.

These results suggest production is hard-wired to the left hemisphere, while comprehension is more flexible. This may explain why it is more difficult to learn to speak a new language as an adult, even though it is possible to learn to understand it quite well.

About this learning research news

Converging evidence for differential specialisation and plasticity of language systems

Functional specialisation and plasticity are fundamental organising principles of the brain. Since the mid-1800s, certain cognitive functions have been known to be lateralised, but the provenance and flexibility of hemispheric specialisation remain open questions. Language is a uniquely human phenomenon that requires a delicate balance between neural specialisation and plasticity, and language learning offers the perfect window to study these principles in the human brain. In the current study, we conducted two separate functional MRI experiments with male and female language learners, one cross-sectional and one longitudinal, involving distinct populations and languages, and examined hemispheric lateralisation and learning-dependent plasticity of three language systems: reading, speech comprehension and verbal production. A multi-pronged analytic approach revealed a highly consistent pattern of results across the two experiments, showing that (i) in both native and non-native languages, while language production was left-lateralised, lateralisation for language comprehension was highly variable across individuals, and (ii) with increasing non-native language proficiency, reading and speech comprehension displayed substantial changes in hemispheric dominance, with languages tending to lateralise to opposite hemispheres; while production showed negligible change and remained left-lateralised. These convergent results shed light on the long-standing debate of neural organisation of language by establishing robust principles of lateralisation and plasticity of the main language systems. Findings further suggest involvement of the sensorimotor systems in language lateralisation and its plasticity.

The human brain exhibits a remarkable ability to support a vast variety of languages that may be acquired at different points in the lifespan. Language is a complex construct involving linguistic as well as visual, auditory, and motor processes. Using functional MRI, we examined hemispheric specialisation and learning-dependent plasticity of three language systems — reading, speech comprehension and verbal production — in cross-sectional and longitudinal experiments in language learners. A multi-pronged analytic approach revealed converging evidence for striking differences in hemispheric specialisation and plasticity between the language systems. The results have major theoretical and practical implications for our understanding of fundamental principles of neural organisation of language, language testing and recovery in patients, and language learning in healthy populations.