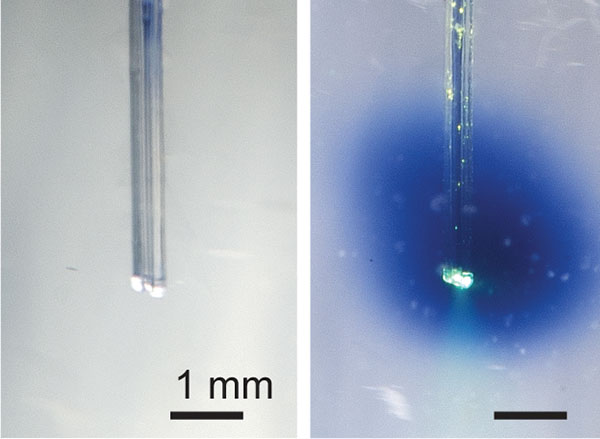 Hormones and nutrients bind to receptors on cell surfaces by a lock-and-key mechanism that triggers intracellular events linked to that specific receptor. Drugs that mimic natural molecules are widely used to control these intracellular signaling mechanisms for therapy and in research.

In a new publication, a team led by McGovern Institute Associate Investigator Polina Anikeeva and Oregon Health & Science University Research Assistant Professor James Frank introduce a microfiber technology to deliver and activate a drug that can be induced to bind its receptor by exposure to light.

“A significant barrier in applying light-controllable drugs to modulate neural circuits in living animals is the lack of hardware which enables simultaneous delivery of both light and drugs to the target brain area,” says Frank, who was previously a postdoctoral associate in Anikeeva’s Bioelectronics group at MIT. “Our work offers an integrated approach for on-demand delivery of light and drugs through a single fiber.”

These devices were used to deliver a “photoswitchable” drug deep into the brain. So-called “photoswitches” are light-sensitive molecules that can be attached to drugs to switch their activity on or off with a flash of light ­– the use of these drugs is called photopharmacology. In the new study, photopharmacology is used to control neuronal activity and behavior in mice.

To use light to control drug activity, light and drugs must be delivered simultaneously to the targeted cells. This is a major challenge when the target is deep in the body, but Anikeeva’s Bioelectronics group is uniquely equipped to deal with this challenge.  Marc-Joseph (MJ) Antonini, a PhD student in Anikeeva’s Bioelectronics lab and co-first author of the study, specializes in the fabrication of biocompatible multifunctional fibers that house microfluidic channels and waveguides to deliver liquids and transmit light.

The multifunctional fibers used in this study contain a fluidic channel and an optical waveguide and are comprised of many layers of different materials that are fused together to provide flexibility and strength. The original form of the fiber is constructed at a macroscale and then heated and pulled (a process called thermal drawing) to become longer, but nearly 70X smaller in diameter. By this method, 100’s of meters of miniaturized fiber can be created from the original template at a cross-sectional scale of micrometers that minimizes tissue damage.

The device used in this study had an implantable fiber bundle of 480µm × 380µm and weighed only 0.8 g, small enough that a mouse can easily carry it on its head for many weeks.

Synthesis of a new photoswitchable drug

To demonstrate effectiveness of their device for simultaneous delivery of liquids and light, the Anikeeva lab teamed up with Dirk Trauner (Frank’s former PhD advisor) and David Konrad,  pharmacologists who synthesized photoswitchable drugs. They had previously modified a photoswitchable analog of capsaicin, a molecule found in hot peppers that binds to the TRPV1 receptor on sensory neurons and controls the sensation of heat. This modification allowed the capsaicin analog to be activated by 560 nm wave-length of light (visible green) that is not damaging to tissue compared to the original version of the drug that required ultraviolet light. By adding both the TRPV1 receptor and the new photoswitchable capsaicin analog to neurons, they could be artificially activated with green light. This new photopharmacology system had been shown by Frank, Konrad and their colleagues to work in cells cultured in a dish, but had never been shown to work in freely-moving animals.

To test whether their system could activate neurons in the brain, Frank and Antonini tested it in mice. They asked whether adding the photoswitchable drug and its receptor to reward-mediating neurons in the mouse brain causes mice to prefer a chamber in which they receive light stimulation.

The miniaturized multifunctional fiber developed by the team was implanted in the mouse brain’s ventral tegmental area, a deep region rich in dopamine neurons that controls reward-seeking behavior. Through the fluidic channel in the device, the researchers delivered a virus that drives expression of the TRPV1 receptor in the neurons under study.  Several weeks later, the device was then used to deliver both light and the photoswitchable capsaicin analog directly to the same neurons. To control for the specificity of their system, they also tested the effects of delivering a virus that does not express the TRPV1 receptor, and the effects of delivering a wavelength of light that does not switch on the drug.

They found that mice showed a preference only for the chamber where they had previously received all three components required for the photopharmacology to function: the receptor-expressing virus, the photoswitchable receptor ligand and the green light which activates the drug. These results demonstrate the efficacy of this system to control the time and place within the body that a drug is active.

“Using these fibers to enable photopharmacology in vivo is a great example of how our multifunctional platform can be leveraged to improve and expand how we can interact with the brain,” says Antonini. “This combination of technologies allows us to achieve the temporal and spatial resolution of light stimulation with the chemical specificity of drug injection in freely moving animals.”

Therapeutic drugs that are taken orally or by injection often cause unwanted side-effects because they act continuously and throughout the whole body. Many unwanted side effects could be eliminated by targeting a drug to a specific body tissue and activating it only as needed. The new technology described by Anikeeva and colleagues is one step toward this ultimate goal.

“Our next goal is to use these neural implants to deliver other photoswitchable drugs to target receptors which are naturally expressed within these circuits,” says Frank, whose new lab in the Vollum Institute at OHSU is synthesizing new light-controllable molecules. “The hardware presented in this study will be widely applicable for controlling circuits throughout the brain, enabling neuroscientists to manipulate them with enhanced precision.”