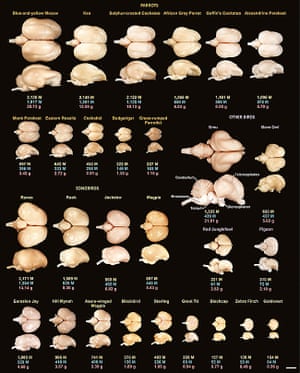 Calling someone “bird brain” used to be considered as an insult. Birds’ brains are very small compared to those of mammals, and what’s more, they lack the heavily wrinkled cerebral cortex, which is characteristic of the human brain, and widely believed to the seat of intelligence. It was, therefore, widely assumed that birds aren’t very clever creatures, but recently this has started to change.

Recently, though, it has emerged that some bird species have remarkable cognitive abilities. In particular, crows, ravens and the like have sophisticated tool-making skills that equal, and perhaps surpass, those of chimpanzees; they can even anticipate the future, and recognise themselves in the mirror. How can they do all this with their walnut-sized brains? New research shows that some birds have very large numbers neurons packed into their brains, comparable to, or even exceed, the numbers of cells than the brains of mammals, which may endow them with greater computational power.

About ten years ago, Suzana Herculano-Houzel of the Universidade Federal do Rio de Janeiro in Brazil and her colleagues developed the isotropic fractionator, a cheap and fast method for estimating the numbers of cells in samples of brain tissue. This involves ‘fixing’ the brain in paraformaldehyde, dissecting it into easily identifiable structures, and dissolving the samples in a salty detergent to produce a cloudy cellular suspension.

Drops of each suspension are then place into a small cell-counting device called a hemocytometer, consisting of a thick microscope slide containing a chamber engraved with a rectangular grid. Individual cells can then be identified under the microscope using antibody-staining, and their total numbers estimated by counting the number of visible cells and then scaling up the figures according to how much of each suspension was placed into the chamber.

In 2005, the researchers used this method to estimate that the brain of an adult rat contains something in the region of 332 million nerve cells. More recently, they used it to count the total number of cells in the human brain, and estimated that it contains around 85 billion neurons, surprisingly smaller than the figure of 100 billion, which is commonly given in neuroscience textbooks.

Overall, they found that bird brains contain significantly more nerve cells compared to mammalian and monkey brains of a similar size, and that these “extra” neurons are located mainly in a structure called the pallium, which is the avian equivalent of the forebrain. For example, the mouse weighs about 9 times as much as the goldcrest, but this tiny bird – the smallest in the UK – packs more than twice as many cells into its brain.

These results are particularly interesting because songbirds and parrots learn their vocalizations by imitation, and their ability to do so far exceeds that of other bird species that have limited vocal learning abilities, or none at all. After hatching, songbirds and parrots undergo a protracted period of maturation, during which time new nerve cells continue to be generated in the brain. This extended period of brain growth is believed to promote the emergence of their remarkable vocal learning abilities, and could have driven the expansion of the pallium during the course of evolution.

The researchers conclude that large numbers of neurons give crows and related birds their superior cognitive skills, by providing more thinking power per unit volume than the brains of other birds or mammals. Evolutionarily, this may have occurred to work around the weight limitations imposed by flight: packing more nerve cells into the brain without a directly proportional increase in size may have enabled them to acquire their remarkable intelligence while keeping their bodies light enough to take off.