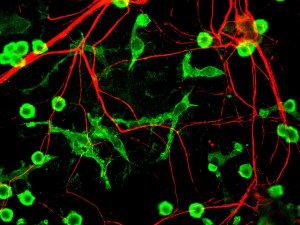 In her most catchily titled book, The Angel and the Assassin, Donna Jackson Nakazawa highlighed nerve cells which have hitherto been very little acknowledged – microglia. Long ignored as bit players in the big league of the nervous system, Nakazawa colourfully illustrated what many neuroscientists are beginning to realise: the small size of microglia belies their huge influence; microglia are, after all, the defence force of the nervous system, protecting the brain from microbial invaders. In keeping with their small size, their role is to surreptitiously present the antigens of invading bugs to T cells, the toffs who actually carry out the final hatchet job. It is therefore not surprising that any dysfunction of microglia will come with significant clinical consequences.

The most important clinical fallout of dysfunctional microglia appears to be the emergence of dementia. It is indeed speculated that microglia may hold the key to stopping the notorious Alzheimer’s disease (AD). This is because microglia seem to play a role in eliminating the amyloid plaques which are thought to contribute to the disease process. Experiments suggest that there is excessive microglial activation in AD, and these supercharged microglia destructively ‘eat up’ synapses, the all-important junctions where nerve cells communicate with each other. It is also relevant that microglial activation is particularly prominent in the hippocampus, a structure critical for memory formation. Because synaptic loss is such a key feature of AD, it is hoped that a better understanding of microglial function may lead to therapeutic tools that modulate AD microglial activation.

Microglial activation also seems to play a role in another prominent neurodegenerative disease, Parkinson’s disease (PD). It is also speculated that microglia are activated in PD as a response to environmental triggers, and the activated microglia cause neuronal damage by producing toxic substances. Because this is presumably an inflammatory process, there is the hope that a better understanding of the process will open up new therapeutic possibilities.

Another disorder in which microglia may play a pathogenetic role is frontotemporal dementia (FTD) in which chronic microglial activation has been reported. It is significant that the microglial activation is most evident in the frontal cortex as this correlates with the behavioural and speech disorders which characterise FTD. More intriguingly, the activated microglia seem to express the progranulin (PGRN) gene mutations that are known to be associated with FTD. Enough clues one might say.

The reach of microglial dysfunction however goes way beyond the big three of AD, PD, and FTD. For example, microglia are acutely activated in traumatic brain injury (TBI), and this may be responsible for the damage that results from this. Microglia also appear to be relevant in cerebrovascular disorders because microglial activation has been reported in ischaemic stroke and in haemorrhagic stroke. And the cherry on top is surely the report that microglia play a role in prion disorders. It may well turn out that neuroscientists are just opening up the microglial can of worms.

Want to find out more on microglia? You may want to explore these links:

When Humans Play in Competition With a Humanoid Robot, They Delay Their Decisions When...