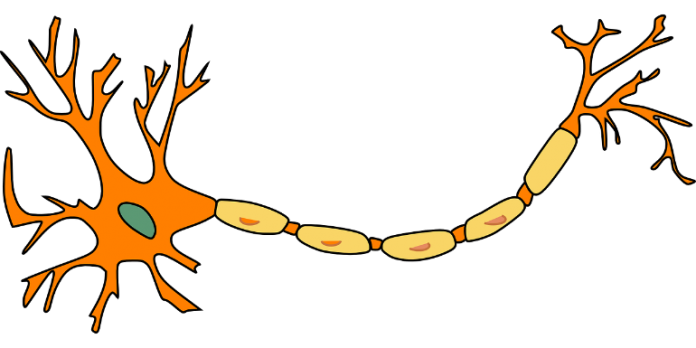 Summary: Researchers have discovered a two-pronged approach to restore myelin on regenerated axons in a mouse model of optic nerve damage. The findings have positive implications for the treatment of multiple sclerosis.

Loss of myelin—the fatty substance that surrounds the axons of nerve cells—is one of the reasons nerve cells fail to recover after injury and in some diseases. Myelin acts like insulation, covering the long axon threads that enable high-speed communication between neurons. Without myelin, the neurons may not be able to coordinate well, leading to less than optimal function.

In new research from the laboratory of Zhigang He, Ph.D., of the F.M. Kirby Neurobiology Center, scientists discovered a two-pronged approach to restore myelin on regenerated axons in a mouse model of optic nerve injury. Their findings may have implications for disease associated with myelin loss, like multiple sclerosis (MS).

“We believe that this work represents an important step towards functional restoration of cells in the adult central nervous system,” says He.

Axons fail to remyelinate after injury

In earlier research, He’s lab discovered several treatments that could promote the regeneration of damaged axons in the optic nerve, but do not restore nerve function. The reason? These regenerated axons are not myelinated. In this new study, published in Neuron, He explains why those axons fail to remyelinate after injury.

In the adult brain, myelination is carried out by cells called oligodendrocyte precursor cells (OPCs).

“We found that in injured optic nerves, OPCs fail to differentiate into mature myelination-competent oligodendrocytes,” says He, meaning they do not develop into cells capable of producing myelin and functioning normally.

After testing a set of available compounds, co-first author Jing Wang, Ph.D., of the He lab, discovered that montelukast, an anti-inflammatory used for treatment of asthma and seasonal allergies, blocked development (or action) of GPR-17. Some axon remyelination was restored but only in about approximately 15 percent of treated nerve cells.

Typically, microglia act as scavengers in the central nervous system, looking for damaging inflammatory cells and infectious compounds and removing them from the site of the injury. However, in this case, the presence of microglia stopped the OPCs from developing into normal oligodendrocytes. Further studies with microglia showed that when they were removed later after injury—in this case two weeks after injury to the optic nerve—OPC development followed more normally.

“In a mice model of optic nerve injury, we found that when we combined treatment of montelukast and removing microglia later after injury, the majority of axons could be remyelinated,” He says.

In the advanced stage of multiple sclerosis (MS), injured nerves suffer from myelination failure. While this research was not conducted in a MS mouse model, the fact that He’s team discovered a way to remyelinate regenerated axons is encouraging since no currently available MS treatments currently work by rebuilding the myelin sheath.

“It is similar to what we see in the optic nerve after injury, “says He. “Both suffer from myelination failure so we believe our results could have some implications for new MS treatments, particularly for progressing MS.”

Psychiatric Drugs Do Not Improve Disease or Reduce Mortality

A Decisive Blow to the Serotonin Hypothesis of Depression