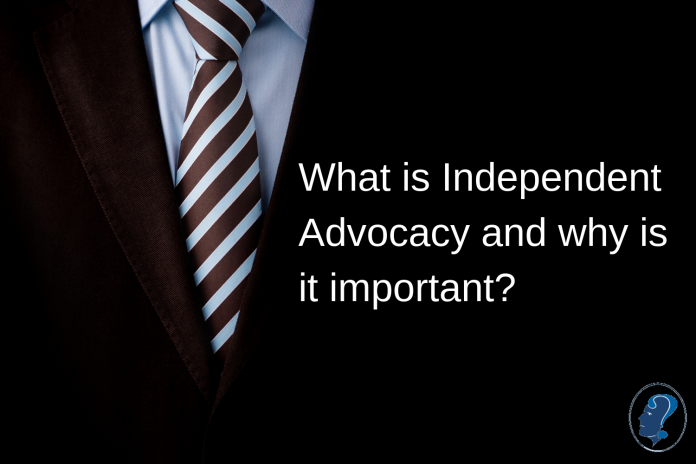 Independent Advocacy is an important concept that was widely discussed during the 2015 changes to the Mental Health Act. It has recently surfaced yet again, after recent reports surrounding advocacy planning and implementation revealed that there is still a lot of work to be done. In this blog, we’ll explore what independent advocacy is, why it’s so important, and the impact of these recent findings on its development.

The purpose of Independent Advocacy

Independent advocacy enables people to exert as much control as possible over their own lives. Crucially, independent advocates are structurally, financially, and psychologically removed from service providers, healthcare providers, and other services. This helps to prevent a possible conflict of interest, which is particularly relevant with patients who are either mentally ill or who do not have mental capacity. It also means that they don’t make any direct decisions for the person they are supporting; instead, they provide them with all the necessary information so that they can make an informed decision themselves. Of course, if the individual in question does not have mental capacity or suffers from a mental illness, then it is possible for an independent advocate to speak on their behalf. As a result, they act as an important spokesperson for these individuals, advising them on their rights and making sure their wishes are carried out (where possible).

The Scottish Independent Advocacy Alliance (SIAA) states that there are four main themes of advocacy:

The importance of Independent Advocacy

Independent Advocacy is crucial to safeguarding the wants and needs of all people. It is a powerful tool that holds relevant decision makers accountable to the desires of these individuals and as a result, is vital in protecting people’s rights. As mentioned previously, it is especially important for those who suffer from mental disorders, as they may find that their wishes are not always considered fully. Equally, it is a vital safety measure that allows them to be fully involved in decisions that directly impact their lives. While this may be somewhat limited if a person does not have mental capacity, it still affords them the right to Independent Advocacy, irrespective of the nature or severity of their mental illness. Indeed, it helps to safeguard the vulnerable from potential abuses of power and institutional inefficiencies which prevent them from expressing their wishes.

Recently, the Mental Welfare Commission published a report that concluded that ‘advocacy services across Scotland is variable and lacks clarity.’ It was released as a follow-up to the 2015 update to the Mental Health Act, which includes a detailed plan for ensuring that advocacy services were both accessible and readily available. Key findings include that the budgets for advocacy services seem to have decreased (except for three areas), and that provisions for children and young people were severely lacking, as those who were receiving compulsory care/treatment were often prioritised. This last issue is further exacerbated by the lack of clear guidelines on how these services are to be made available to children and young people with mental health issues or learning disabilities.

Despite the somewhat discerning conclusions in these reports, it is the renewed awareness and various resulting action points that will, over time, allow us to keep expanding and improving advocacy services.

We provide independent psychiatric reports for clients subject to detention under the Mental Health Act, including both Short-Term Detentions and Compulsory Treatment Orders (CTO). We address whether the criteria for detention are met, that guiding principles are being adhered to and that the least restrictive options have been given due consideration. Please contact us for more information.

Hospital Uses Court to Keep Patient for a Year, Charges $1.2 Million and Drugs Him to Death

The Mad Priestess: A Call to Healing