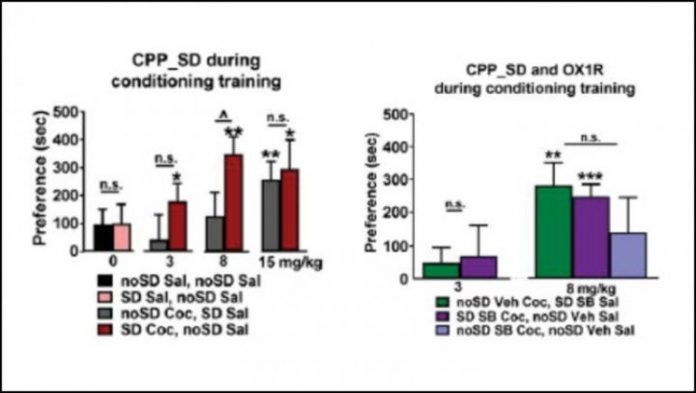 Sleep deprivation may pave the way to cocaine addiction. Too-little sleep can increase the rewarding properties of cocaine, according to new research in mice published in eNeuro.

Poor sleep and cocaine use go hand-in-hand. Both acute and chronic cocaine use disrupts sleep, and sleep disturbances can increase the likelihood of relapse. But it’s unclear how sleep deprivation contributes to cocaine addiction.

The orexin system, which influences motivated and addictive behaviors through the peptide orexin, may underly the relationship: orexin activity increases during sleep deprivation, and blocking orexin receptors reduces reward-seeking.

Bjorness and Greene conditioned mice to associate a room with cocaine and examined how sleep deprivation affected their ability to develop a preference for the cocaine room. Sleep-deprived mice formed a preference for a lower dose of cocaine, one that did not affect rested mice.

They also formed a stronger preference for a standard cocaine dose, indicating an increase in the amount of reward cocaine provided. Blocking the orexin system reduced the increased cocaine preference driven by sleep deprivation.

Drug addiction and withdrawal are characterized by sleep disruption, but the effects of sleep disruption on these states are not well characterized. Sleep deprivation (SD) immediately prior to the cocaine conditioning trials enhanced cocaine conditioned place preference (CPP) in a dose-dependent manner (3, 8 mg/kg but not 15 mg/kg) in mice. SD immediately prior to the post-conditioning test, also enhanced cocaine CPP preference in a dose dependent manner (8 mg/kg, but not 3, 15 mg/kg). Exposure to orexin-receptor antagonism (1 mg/kg SB334867, an orexin 1 receptor antagonist) just prior to cocaine-conditioning trials or the post-conditioning test, attenuated SD-enhanced preference. This suggests a potential therapeutic role for the manipulation of the orexin system to mitigate drug seeking, especially in the context of sleep loss prior to drug exposure.

Drugs of abuse, including cocaine, disturb sleep and sleep disturbance has been implicated in probability of relapse; however, there have been few direct tests of sleep disturbance on drug seeking behavior. Here, we show that acute (4h) sleep deprivation enhances the rewarding properties of cocaine, a drug with high abuse potential. Furthermore, antagonism of the orexin system, a neuromodulator involved in motivation-based arousal, reduces this SD-induced enhancement of cocaine preference.

How Robots Learn to Hike