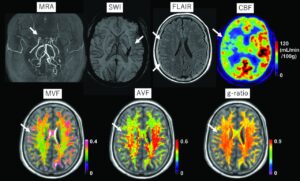 Eighteen patients with Moyamoya disease (16–55 years of age) and 18 age- and sex-matched healthy controls were evaluated with myelin-sensitive MR imaging based on magnetization transfer saturation imaging and 2-shell diffusion MR imaging. The myelin volume fraction, which reflects the amount of myelin sheath; the g-ratio, which represents the ratio of the inner (axon) to the outer (axon plus myelin) diameter of the fiber; and the axon volume fraction, which reflects axonal components, were calculated and compared between the patients and controls. In the patients with Moyamoya disease, the relationship between these parameters and cognitive task–measuring performance speed was also evaluated.

Compared with the healthy controls, the patients with Moyamoya disease showed a significant decrease in the myelin and axon volume fractions (P < .05) in many WM regions, while the increases in the g-ratio values were not statistically significant. Correlations with cognitive performance were most frequently observed with the axon volume fraction (r = 0.52–0.54; P < .03 in the right middle and posterior cerebral artery areas) and were the strongest with the g-ratio values in the right posterior cerebral artery region (r = 0.64; P = .004).

Myelin-sensitive MR imaging and diffusion MR imaging revealed that myelin and axonal damage exist in patients with Moyamoya disease. The relationship with cognitive performance might be stronger with axonal damage than with myelin damage.