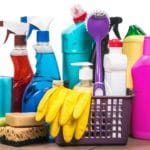 People with germ and disease aversion are much more likely to engage in COVID-19 preventative behaviors, compared to older adults or those with a perceived higher risk, according to a new study from the University of Connecticut School of Nursing.

“When we feel disgust toward something, our behavioral response is to avoid it and get away from it, but people vary in their experience of disgust,” said Dr. Natalie J. Shook, a social psychologist, associate professor, and principal investigator for the study.

“In thinking about these psychological processes, what we’re interested in is whether people who are already more sensitive to potential disease threats are then more inclined to follow prescribed preventative health behaviors.”

The findings, published in the journal PLOS ONE, are part of a year-long study looking into how behavior and social attitudes change, and what factors influence those changes, when Americans are faced with the threat of widespread disease.

Supported by a National Science Foundation grant, the study is tracking the well-being, feelings, and behavioral practices of about 1,000 individuals across the country, and more than 18 surveys of the participants have already been conducted since the research began in March.

Study participants reported their overall concerns about COVID-19 and how often they engaged in preventative health behaviors like physical distancing, frequent hand washing, avoiding touching their face, wearing a facemask, and cleaning and disinfecting.

Participants also answered a series of demographic and social questions, including their age, political and religious values, and socioeconomic status, as well as questions designed to gauge risk factors for the disease, such as whether they had an underlying health condition that might predispose them to severe illness, whether a family member might be at greater perceived risk, or whether they recently had or believed that they had been ill with COVID-19.

“What we found in our data set was that the most consistent predictors of concern about COVID and then engagement in preventative health behaviors are actually those psychological disease avoidance factors,” said Shook.

“Older participants reported more concern about COVID, which makes sense — they’re at higher risk,” Shook said. “But when we looked at preventative health behaviors, we weren’t necessarily seeing that older adults were engaging more in preventative health behaviors. So, where there was the concern, that wasn’t necessarily translating into the behaviors that could protect them?”

People with higher incomes were associated with more engagement in physical distancing and cleaning behaviors, but they would also have greater access to resources, such as cleaning supplies, and the potential to work from home because of their socioeconomic status, Shook said.

Recent illness and general perceived health were also associated with many preventative health behaviors, though the individual reasons could vary, from motivations to prevent others from becoming ill to greater awareness due to recent illness.

The researchers say their findings identify a variety of characteristics that may place individuals at risk for contracting and spreading disease during a pandemic.

“We took a really broad approach to looking at the different factors that are related to different preventative health behaviors,” said Shook.

“The fact we are seeing psychological disease avoidance variables as coming out more consistently — which conceptually was not surprising, that’s what they should be doing, but that we’re seeing those above and beyond traditional personality traits and demographics — I think might speak to something we could potentially tap into.”

Depression May Not Stem From a “Chemical Imbalance” After All – Suggesting the Problem...