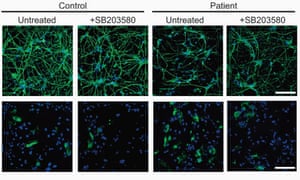 Stem cells obtained from patients with schizophrenia carry a genetic mutation that alters the ratio of the different type of nerve cells they produce, according to a new study by researchers in Japan. The findings, published today in the journal Translational Psychiatry, suggest that abnormal neural differentiation may contribute to the disease, such that fewer neurons and more non-neuronal cells are generated during the earliest stages of brain development.

Schizophrenia is a debilitating mental illness that affects about 1 in 100 people. It is known to be highly heritable, but is genetically complex: so far, researchers have identified over 100 rare genetic variations and dozens of mutations associated with increased risk of developing the disease.

One of the best characterised mutations associated with the disease is a microdeletion on chromosome 22, within a region containing dozens of genes known to be involved in the development, maturation, and function of brain circuits. This deletion is found in 1 in every 2,000 – 4,000 live births; all patients carrying it exhibit various psychiatric symptoms and conditions, with just under a third of them developing schizophrenia in adolescence or early adulthood.

Manabu Toyoshima of the RIKEN Brain Science Institute and his colleagues obtained skin cells from two female schizophrenic patients diagnosed with the chromosome 22 deletion and two healthy individuals, then reprogrammed them to generate induced pluripotent stem cells (iPSCs), unspecialised cells which, like embryonic stem cells, retain the ability to differentiate into all the different cell types in the body. They then compared the properties of iPSCs obtained from the schizophrenic patients with those from the healthy controls.

First, the researchers ‘plated’ the cells onto Petri dishes and treated them with chemicals so that they began to differentiate into neural stem cells. Under these conditions, iPSCs aggregate spontaneously to form ‘neurospheres’. These free-floating spherical clusters contain neural stem cells, which can differentiate further into any type of nerve cell, and also some neural progenitors, or immature nerve cells that have started to differentiate into neurons or glia, the non-neuronal cell types in the nervous system.

Toyoshima and his colleagues immediately noticed that the neurospheres derived from iPSCs obtained from the schizophrenic patients were significantly smaller than those formed from iPSCs from the two healthy controls.

On closer inspection, they found other abnormalities. They treated the neurospheres with fluorescent antibodies that bind specifically to proteins synthesized only by neurons or glial cells called astrocytes, and looked at them under the microscope.

These abnormalities resemble those seen in genetically engineered mice lacking the Dgcr8 gene, which is located on the region of chromosome 22 that is deleted in some schizophrenic patients. The gene normally encodes a microRNA that regulates the activity of neural stem cells by inhibiting a protein called p38, so that they generate the correct number of neurons and glial cells.

Thus, it seems that p38 levels are increased in schizophrenic patients with the chromosome 22 deletion, and that this alters the balance of neurons and glia produced by the neural stem cells. To confirm this, the researchers inhibited p38 in the patient-derived neurospheres, using a chemical called SB 203580, and found that this partially restored the imbalance, so that they more closely resembled those from the healthy controls.

Finally, they used the same antibodies to examine post-mortem brain tissue from schizophrenic patients, and noted significantly increased levels of a protein synthesized exclusively by astrocytes, again confirming that the chromosome 22 deletion disrupts the balance of the numbers of neurons and glia formed from neural stem cells.

Schizophrenia is what researchers call a heterogeneous disease. It is characterised by a constellation of symptoms, such as delusions of grandeur or persecution, visual or auditory hallucinations, and disorganized speech, thinking, and behaviour. A diagnosis is reached when a patient exhibits at least two of these symptoms for longer than one month. No two patients exhibit exactly the same symptoms, however, and it’s likely that each case involves a unique combination of the genetic mutations associated with the disease.

In recent years there have been other important findings about both the genetic basis of schizophrenia and the brain abnormalities associated with it. We now know, for example, that synaptic connections are eliminated wrongly in schizophrenia. It’s also becoming clear that genetic variability between individual neurons, caused largely by so-called ‘jumping genes,’ contributes to the development of neuropsychiatric diseases, and in 2014, Toyoshima and his colleagues published evidence for increased jumping gene activity in the brains of patients with schizophrenia.

The researchers stress, however, that this latest study involved examining iPSCs from just two schizophrenic patients, and that their findings may apply only to patients carrying this particular mutation, rather than to all who are diagnosed with the disease. (It’s also possible that other mutations associated with schizophrenia could perturb neural differentiation in the same way.) Even so, the findings may still be important for our understanding of this complex disease, and of other neurodevelopmental conditions such as autism.

Britney Spears Speaks Out Against ‘Abusive’ Conservatorship: ‘I Want to Be Heard’