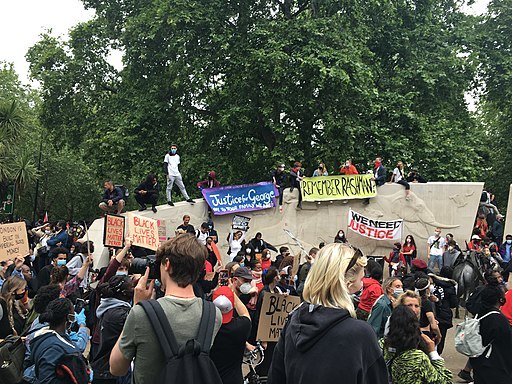 Protests and riots that began in Minneapolis after police killed an unarmed African American have now spread to over 23 states. I recently led a large-scale programme of research on the wave of riots in England in 2011 to address the question of how such events spread. The UK and US waves were different in important ways – most obviously, in the US many of the collective events have been peaceful protests, whereas in England only the initial protest was peaceful. Yet there are some striking similarities between them, as well as with other waves of riots. This similarity suggests that some of the same processes are operating.

It’s necessary to begin by examining the meaning of the precipitating incident and the social categories involved. What did ‘they’ do, and who are ‘we’?

In Minneapolis 2020, as in Tottenham in 2011 (and as in Watts 1965, Brixton 1981 and many others), actions by police officers against an individual encapsulated the whole relationship between a wider group and an institution. In each case, the violence inflicted was seen as embodying the history of relations between police and Black / African-American people, where police harassment, assault, and collective humiliation were a daily experience.

Our research found that a local history of police harassment was key predictor of which districts rioted in London in 2011. Other predictors were local deprivation and negative attitudes to the police. Research in the US has found that race is another predictor of where riots occur. These factors correlate, of course: African-Americans are more likely to live in deprived districts and to be subject to police harassment and killing.

But these factors are relatively constant. They help explain which cities riot, but they don’t tell us when and how protest or rioting in one city influences people in other cities to join a wave.

We found three types of social-psychological processes that helped explain how a wave occurs.

First, there is spread via a shared identity with those in other cities. This is where people in different locations each define themselves in terms of a similar shared history of injustice at racist policing and resistance to that injustice. Our interviewees said of the police killing of Mark Duggan in 2011, ‘that could have been me’ and ‘that could have been my friends’. This shared identity with those rioting in response to the killing provided a normative motivation to do the same in their own district: the police needed to be shown that they cannot get away with murder. In the case of the George Floyd events, African American identity, defined in terms of a history of police violence, is clearly a key factor leading people in many cities to feel the same sense of injustice and anger as those in Minneapolis. For these people, and for others who feel solidarity with African Americans, action to express that sense of injustice – including punishing the police – is an enactment of common identity.

Second, there is a process that social movement researchers call capacity to mobilize and protest researchers call collective efficacy. In our research, we use the term empowerment. This captures the experience of one’s social relations becoming transformed as power shifts from the police to the crowd. In the English riots, some participants didn’t necessarily identify with the original rioters. But they could see that a common outgroup — the police – were becoming weakened. This empowered them to participate in their own area, including going beyond the initial issue to enact long-standing grievances and desires.

People’s perceptions of the identity and empowerment of others was crucial. They came onto the streets when they not only identified with the other location or were empowered by police weakness but also believed that others locally felt the same way. This in turn was the basis of expectations of support for ingroup normative actions – in this case against the police and some properties.

The third process that helps explain riot spread concerns police perceptions. We found that previous rioting led to a heightened level of organizational vigilance in the police. This state of expectancy can lead to pre-emptive forms of police intervention — such as violent dispersal of a non-violent crowd. Where people in the crowd experience these police actions as illegitimate and indiscriminate, there are significant unintended consequences. Such actions by police serve to unite the crowd – both those who did not originally intend to fight and those who did — around a new norm of fighting back against the police.

Some of the coverage of the current wave of US riots has tried to suggest that powerful agitators are involved, with the implication that the crowd is easily swayed. Like the ‘contagion’ metaphor that is so frequently employed in these contexts, it suggests an unthinking crowd and therefore detracts from the meaningfulness of crowd action. Notions of mindless influence do not explain who joins in (and who doesn’t). Nor do they explain the widespread selectivity of targets. Such notions also let the authorities off the hook. As our research has shown, and the events across the US illustrate, the spread of riots is a complex social phenomenon grounded in collective definitions of identity, injustice, and changing power relations between groups.

John Drury is professor of social psychology at the University of Sussex. The Beyond Contagion project was funded by the Economic and Social Research Council, and carried out by John Drury, Roger Ball, Clifford Stott, Stephen Reicher and Fergus Neville

Brain Disease Transmitted By Tick Bites May Be Treatable