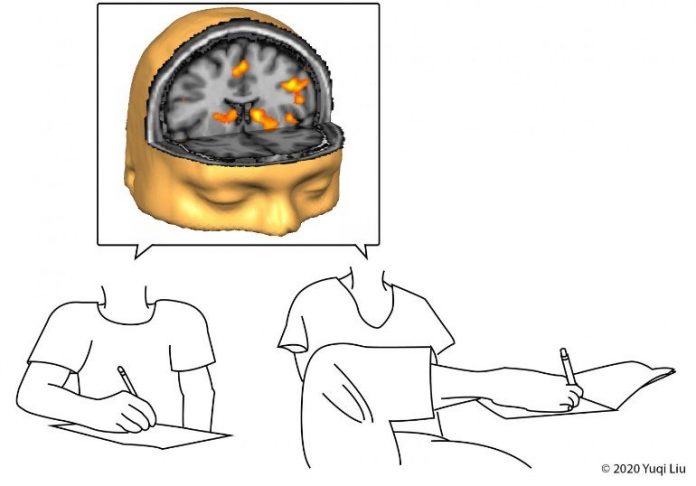 Summary: The brain processes motor commands, not just through fine muscle contractions, but also via higher-level motor areas that provide a blueprint for performing more complex motor functions, such as grasping, no matter if the toes or fingers are used.

People born without upper limbs who use their feet to reach for an item engage the same area in the brain that people with hands use to reach for something, report Georgetown University Medical Center neuroscientists.

The finding, published October 26, 2020 in PNAS, advances the basic science of brain organization and function, and offers potential future clinical advances including improving limb prostheses, says the study’s senior investigator, assistant professor Ella Striem-Amit, PhD, who leads the Sensory and Motor Plasticity Lab in the Department of Neuroscience at Georgetown.

The new study suggests that the brain processes movement commands not just through controlling fine-tuned muscle contractions, but also through higher-level, motor areas that provide a blueprint for performing more complex motor functions, such as reaching and grasping, no matter if fingers or toes are used.

Evidence of these areas, which provide the blueprint for finely tuned action, came from studying two groups. One consisted of four individuals with dysplasia (people born without arms or hands) who used their toes to reach for or grasp an item. The other is a control group of volunteers who first used their hands, and then used their toes to reach and grasp. Across all of these different situations, participants activated the same brain areas that are selective to the reaching action, along with activating the primary motor cortex that controls the muscles in hands and feet.

“The study shows that some areas within the motor system develop to compute a complex action or task, such as reaching and grasping, and these actions don’t depend on a person’s motor experience. So using an arm or a leg to reach an item lights up the same areas on fMRI scans,” she says. “This is more abstract than the way the brain controls fine-tuned flexion of a specific body part, such as a limb. Fine control of an arm, for example, corresponds to one area in the central nervous system and control of a leg corresponds to a different area. This is point to point organization.”

“We are building a model that demonstrates that computation for specific tasks like reaching and grasping that is a higher level of action function that differs from, and is independent of, lower-level action function such as the use of an arm. We believe this organization is a general principle of brain design,” says Yuqi Liu, PhD, a post-doctoral research fellow in the Striem-Amit’s SAMP Lab. Other co-authors include Alfonso Caramazza, PhD from Harvard University, and Gilles Vannuscorps, PhD, from Université catholique de Louvain.

Striem-Amit says this work studying people born without hands complements hers and other groups’ previous findings in people born deaf or blind.

Past studies found that higher-order visual and auditory cortex performs specific tasks, regardless of sensory modality. For example, an association visual area is selective to letters, whether presented visually to typical controls or via Braille or a sensory substitution device to congenitally blind people. A higher-order auditory area processes temporal rhythms both when controls were presented with auditory sequences or congenitally deaf individuals were presented with visual sequences.

“Similarly, in our study, association motor areas are selective to action type, regardless of specific body part,” says Striem-Amit. “A commonality in higher-order visual, auditory, and motor areas is that they appear to be organized based on function and independent of specific sensorimotor parameters.”

The findings could be applied to the development of improved limb prostheses, Striem-Amit says. Current prostheses perform by having their user dictate the coordinated, low-level movement parameters of the prosthesis, which is very complex and taxing. What may help is using the higher level command, she explains.

Striem-Amit adds, “In the long run, if we better understand action representations at a higher command level maybe we can guide prostheses not only at motion of the hand, but also at a higher action aim level, which could lead to lower rejection of prostheses.”

Funding: This work was supported by the von Matsch Professorship in Neurological Disease to Striem-Amit, the Societa? Scienze Mente Cervello-Fondazione Cassa di Risparmio di Trento e Rovereto, a grant from the Provincia Autonoma di Trento, and a Harvard Provostial postdoctoral fund to Caramazza.

Original Research: The study will appear in PNAS.