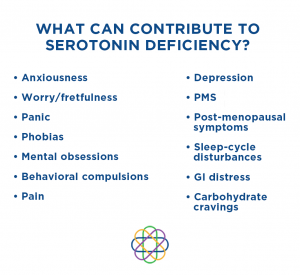 Serotonin is one of the most widely recognized of all neurotransmitters. It is intricately involved in numerous core physical processes such as the regulation of sleep, appetite, and aggression. Serotonin is also a key player in mood, anxiety, fear and a general sense of well-being. Imbalances in serotonin, particularly relative to norepinephrine and dopamine, are common causes of certain types of depression. Antidepressants that block serotonin’s re-uptake back into serotonin neurons are among the most common of all classes of medications prescribed.

Serotonin deficiency is a common contributor to mood problems. Some feel it is an epidemic in the United States. Serotonin is key to our feelings of happiness and very important for our emotions because it helps defend against both anxiety and depression. Many of the current biochemical theories of depression focus on the biogenic amines, which are a group of chemical compounds important in neurotransmission—most importantly norepinephrine, serotonin and, to a lesser extent, dopamine, acetylcholine and epinephrine.

WHAT CAUSES OR CONTRIBUTES TO SEROTONIN DEFICIENCY?

Many life stressors can lead to low serotonin:

You may have a shortage of serotonin if you have a sad depressed mood, low energy, negative thoughts, feel tense and irritable, crave sweets, and have a reduced interest in sex. Other serotonin-related disorders include:

HOW DO I KNOW IF SEROTONIN IS DEFICIENT?

Neurotransmitter testing, Questionnaires, and blood testing can help determine if you might have a serotonin deficiency. Certain tests can determine if you have normal levels of the precursors and co-factor vitamins and minerals needed for the brain to produce serotonin. Additionally, hormones such as Adrenal, Thyroid, and Estrogen levels can affect serotonin levels, and may explain why some women have premenstrual and menopausal mood problems.

HOW TO RAISE SEROTONIN LEVELS NATURALLY

Prescription drugs such as Prozac, Zoloft, Paxil, and Lexapro are classified as serotonin reuptake inhibitors, or (SSRIs). They help to keep more of the serotonin your brain is making in circulation. They do not, however, increase your brain’s supply of serotonin. Some studies, in fact, indicate that over time they may actually accelerate your turnover of serotonin, thereby making your serotonin deficiency worse. They are used for a wide variety of symptoms such as depression, panic attacks, anxiety, PTSD, obsessions, and compulsions. There are also serotonin/norepinephrine reuptake inhibitors (SNRIs) such as Effexor and Cymbalta that keep more serotonin and norepinephrine in circulation. Again, such agents do not help you build more neurotransmitters.

Find out more about the serotonin and norepinephrine supplements we have available!

Nutrient therapies such as Targeted Amino Acid Therapy naturally increase the levels of neurotransmitters that a person has been found to be deficient in. 5-Hydroxytryptophan and Tryptophan are widely known for their ability to help depressive symptoms by raising serotonin levels in the brain. Numerous clinical trials have studied the efficacy of 5-HTP for treating depression. One compared 5-HTP to the antidepressant drug fluvoxamine, and found 5-HTP to be equally effective.

Herbal remedies, such as St. John’s Wort, are available to alleviate symptoms of depression and anxiety. Some work in a similar way to the SSRI antidepressants.

THINGS YOU CAN DO TO INCREASE YOUR SEROTONIN LEVELS AND IMPROVE OVERALL HEALTH.

What Our Wandering Thoughts Can Teach Us About Mental Health