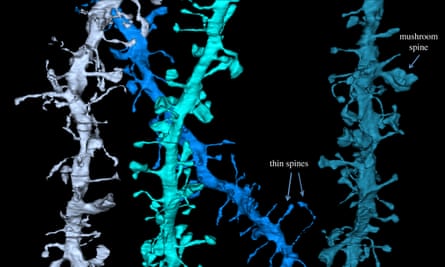 We spend one third of our lives sleeping, but we still do not know exactly why we sleep. Recent research shows that that the brain does its housekeeping while we sleep, and clears away its waste. According to another hypothesis, sleep plays the vital role of restoring the right balance of brain synapses to enhance learning, and two studies published in today’s issue of Science now provide the most direct evidence yet for this idea.

We do know that sleep is important for consolidating newly formed memories. During waking hours, we learn all kinds of new information, both consciously and unconsciously. To store it, the brain modifies large numbers of synaptic connections, making some of them stronger and larger, and it’s now thought that as we sleep other synapses are weakened or destroyed, so that the important new information is stored for later use, while irrelevant material, which could interfere with learning, is not.

Giulio Tononi argues that the synaptic strengthening that accompanies learning increases the brain’s energy consumption, and may overload its capacity for processing information. His synaptic homeostasis hypothesis states that sleep renormalises the overall strength of synapses across the brain, and that large-scale “downscaling” of synapses takes place when the brain is offline during sleep, to counterbalance the increases that occur during learning.

Tononi and his long-term collaborator Chiara Cirelli have already shown that even short periods of sleep or wakefulness alter synaptic activity at multiple levels, and make synapses shrink or grow, respectively. Their latest study now seems to show that widespread synaptic downscaling takes place in the brains of mice while they sleep.

The new work, led by research associate Luisa de Vivo, involved collecting the brains of four mice that had just slept, four that had been kept awake to play with new toys, and four that had stayed awake on their own, and used a technique called serial block-face scanning electron microscopy to create high-resolution three-dimensional images of almost 7,000 synaptic connections in two different regions of the cerebral cortex – a task that took more than four years to complete.

The researchers examined thousands of images, to calculate the total surface area of contact between nerve terminals and dendritic spines, the tiny, finger-like protrusions which serve as the receiving end of brain synapses, and which grow larger when the synapses become stronger.

They found that it was decreased by about 18% in the mice that had slept compared to those that had remained awake – in other words, there was an overall decrease in the number of synaptic connections. And rather than being uniform, the downscaling was restricted to small spines, and spared the larger ones that were presumably involved in learning – consistent with the idea that synaptic connections are scaled down during sleep.

The second study provides further evidence for the synaptic homeostasis hypothesis, and also points to the molecular mechanisms underlying downscaling.

Graham Diering of Johns Hopkins University and his colleagues investigated how synapses are altered by the sleep/wake cycle, using two-photon imaging to visualise fluroescently-tagged synaptic proteins in the brains of live mice, and proteomic methods to purify and analyse the proteins from dendritic spines.

They found that sleep is associated with a decrease in the size of dendritic spines, and with a roughly 20% reduction in levels of a molecule called the AMPA receptor, which are removed from the shrunken spines. When mice are awake, a synaptic scaffold protein called Homer binds other receptors and their molecular partners together in a complex which it keeps in place at the synapse beneath the cell membrane. During sleep, a shortened variant called Homer1a enters dendritic spines to disassemble these complexes and drive the removal of AMPA receptors, which shrinks and weakens the connection.

They also created genetically engineered mice lacking the Homer1a gene. These animals slept just like their ordinary littermates, but the protein composition of their dendritic spines did not change, confirming that Homer1a plays a crucuial role in triggering synaptic downscaling.

Finally, the researchers trained mice to associate a particular location with mild electric shocks, and then injected some of them with a chemical that prevents Homer1a from entering dendritic spines. They then transferred the mice to a new environment. The untreated mice explored their new location freely, but those injected with the chemical cowered in the corner – a behaviour indicative of fear and anxiety – suggesting that they had intrusive memories of the shocks they had been given earlier.

Together, these studies provide the most compelling evidence yet for the synaptic honmeostasis hypothesis. They help to explain why sleep is beneficial for mental function, and why “sleeping on it” can help us think more clearly.

Many questions remain, however. How, for example, are synapses scaled down? We know that immune cells called microglia ‘prune’ synapses, but do they also participate in downscaling? How is synaptic downscaling linked to the neuronal activity associated with learning and memory? And how does it contribute to memory consolidation?

Mo Costandi trained as a developmental neurobiologist and now works as a freelance science writer. His work has appeared in Nature, Science, and New Scientist, among other publications. He is also the author of Neuroplasticity (MIT Press, 2016) and 50 Human Brain Ideas You Really Need to Know (Quercus, 2013).

ALERT: PROTECT CHARLES HELMER FROM FORCED ELECTRO-SHOCK IN MN BEFORE THIS FRIDAY

Pandemic Has Increased Pregnancy Stress for US Women