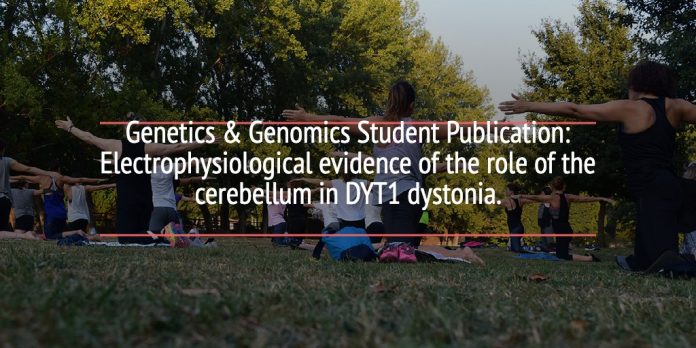 Genetics and Genomics Graduate student Yuning Liu is the first author on a recent publication entitled “The abnormal firing of Purkinje cells in the knockin mouse model of DYT1 dystonia.”

Liu is in Dr. Yuqing Li’s lab which mainly focused on the pathophysiology and experimental therapeutics of DYT1 dystonia.

Dystonia is a movement disorder in which your muscles contract involuntarily, causing repetitive or twisting movements. There is currently no cure for the disorder but many studies are being done for possible treatments.

When discussing the long-term implications of the study Liu stated that the findings may suggest a modulatory role of Purkinje cells in DYT1 dystonia pathogenesis. She also explained how this research may benefit people in the future with dystonia.

“Deep brain stimulation is a powerful treatment for DYT1 dystonia patients,” Liu said. “However, there is also significant variability in outcomes for the patients. Future preclinical and clinical studies using optogenetics and/or chemogenetics techniques to manipulate Purkinje cells activity may have great promise to treat DYT1 dystonia patients.”

Singing in the Brain – Neuroscience News